This is the fifth national conference members of this committee have organised.  We continue to choose locations in different parts of England and Wales, this time at a hotel on the outskirts of Weston-super-Mare, Somerset.

Delegates numbering 130, together with 28 guests, speakers, exhibitors, media and staff attended and received a delegate pack.  A breakdown of delegates revealed that Pubwatch representation numbered 31, police 78, local authority 21 and others 28. There were also 16 ‘no shows’.  Additionally, there were 14 exhibitors.  Unfortunately, none of our supporters within both Houses of Parliament were again able to attend.

We again decided to change the format slightly, utilizing the skills of a theatre group to perform a play based in a public house, where the actors role-played how a licensee/bar staff should not respond to specific incidents relating to their role and responsibilities.  This short play acted as a trigger for discussion in the subsequent Workshops and Panel Discussion.

An outline of these presentations and Workshops can be found within this conference report.

The fourteen display stands ranged from national organisations to local partner agencies and initiatives.  Each generated much interest.  The whole event was filmed by the Sky Pub Channel and will feature on that Channel in the near future.

The committee wish to thank all the sponsors for supporting this conference.  They include the Government Office of the South West and the British Beer and Pub Association.

Thank you also to the Publican for agreeing to allow Daniel Pearce, their Managing Editor, to facilitate the Panel discussion, to the speakers and Workshop facilitators and all the other contributors for giving up their valuable time.

Additionally, the committee wish to thank staff of the Rookery Manor Hotel, Edingworth, near Weston-super-Mare, for their enthusiasm and expertise in assisting with organising and smooth running of this conference.

Finally, thank you to all the delegates, without whom this conference could not have taken place.  All the evaluations received are of great assistance to the Committee, enabling us both to more accurately identify ways of enhancing our role, and ensure that our next conference addresses many of your needs.

Steve Baker
As chair of National Pubwatch, he welcomed all present.  He explained that he was due to acknowledge the tremendous work of one of National Pubwatch’s founder members, Bill Stone, on its tenth anniversary, by presenting him with a special gift.  Bill was a licensee for many years and recognised the value of licensees working together to reduce incidents of crime and anti-social behaviour. Through his practical experience of working with a number of Pubwatch schemes he realised that there was a need for a national group that could support licensees who needed help in starting their own schemes. Subsequently Bill and other like minded individuals formed the National Pubwatch Schemes in 1997.  Since that date this group has assisted and supported the creation of more than 500 new Pubwatch schemes.

Unfortunately, Bill had recently fallen ill and was unable to attend this conference.  However, this gave the Committee the opportunity to show a short film of the work of The Licensed Trade Charity and refer delegates to its display stand.  This charity supports both current and former licensees, who require assistance, whether health-related or otherwise.

Bill Donne
As chair of Reading Pubwatch, Bill gave an overview of the initiatives undertaken, which led to his Pubwatch receiving first prize the Best Pubwatch category within Morning Advertiser 2007 Responsible Drinks Retail Award Scheme.  This Award was given for three main reasons:

In 2004, a Licensees’ Association was created following the publication of the Licensing Act 2003 and the subsequent local Licensing Policy.  Reading Pubwatch was formed and representatives from various authorities attended as guests.  Initially membership consisted of licensees from 10-12 of the larger venues.  Subsequently, membership extended to 70, which became rather unwieldy, so it was decided to split into two groups, Pubs and Venues.

Communication between all partners improved and the benefits of such working together acknowledged, leading to more local areas wishing to form and join.  Key to the formation and development of suburban groups was the support from partner agencies and the selection of appropriate licensees in the posts of chair and secretary.

Currently there are seven Pubwatches, four suburban areas, two in the town centre and a dedicated Studentwatch.  Pubwatch also has representation on many of the local community safety and neighbourhood initiatives, which include:

The use the drug-passive dogs and itemiser highlighted the connection between cocktail drugs and alcohol with violence, contributing to a reduction in violent crime of 22% last December.  Challenge 25, similar to Challenge 21, was also introduced at some venues where customers apparently under that age are likely to be asked for the recognised form of identification.  The off-licence conference attracted representatives from 42 premises and contributions from many partner agencies.  Their Safer Bar Awards recognised quality operations through a rigorous auditing process, with nine premises receiving such an Award.

The Best Pub Awards promoted in conjunction with the Reading Evening Post, has five categories:

Winners of both these Awards were announced at a ceremony following a well attended dinner and dance.

Reading Pubwatch has also held two conferences on Project Argus, focusing on anti-terrorism, yet including all types of major incidents that could involve licensed premises.

They have also created their web site www.readingpubwatch.com which contains a range of information, including password-protected areas for members.

All the above activities have contributed to a decrease of 33% in serious assaults/wounding in past two years in or around licensed premises, have led to open, direct and frank communications where all partners are held to account.  Additionally, the sharing of intelligence and the promotion of best practice has been greatly enhanced.

Play by the MOPA Theatre Company

Actors performed live incidents in a bar, where scenarios included the licensee/bar staff:

An undercover police officer, who was present throughout, observed all that took place and then made his identity known to the member of staff. 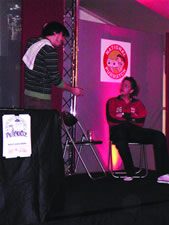 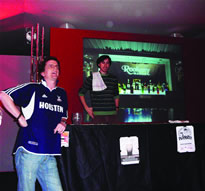 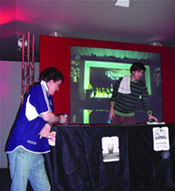 These issues raised were intended as a trigger for discussion in the subsequent Workshops.

Delegates attended two of three Workshops as outlined on page 1.

Jay Capel explained how test-purchase visits take place and set out key defences to ‘due diligence’ that licensed premises should ensure are present:

John McNamara explained the PASS (Proof of Age Standards Scheme), which gives licensees assurance that proof-of-age card produced is genuine.  It is well known that there are many fraudulent and novelty forms of identification currently in circulation.  However an ID card carrying the PASS hologram is as valid as a passport and driving licence when members of staff check the identity of its holder.  Whilst there have been instances of forged passports and driving licences, the PASS hologram has never been forged.  John suggested that the PASS scheme and being a member of a Pubwatch should be added to Jay’s list of key defences to ‘due diligence’ outlined above.

Jeremy Allen and Susanna Poppleston threw the floor open to questions, resulting in discussions on:

Duncan Slade explained some of the results of the Home Office campaign on tackling under-age sales of alcohol, where over the past two years, a large number of premises, some specifically targeted, received test purchase visits.  He also defended the decision to send ‘undercover’ officers into pubs to identify the sale of alcohol to drunken persons.  Instead of alienating the enforcement agencies through these initiatives, it has actually improved partnership working with licensees for well run premises.

Jon Franklin-Webb briefly introduced the recommendation that each premise should consider having a policy on how they should deal with ‘Drugs in the Workplace’, whether it involves customers or members of staff.

The Panel comprised Jeremy Allen, Susanna Poppleston, Duncan Slade, Jay Capel and Malcolm Eidmans.  It was facilitated by Daniel Pearce, the Managing Editor of the Publican.  Some of the actors from the MOPA Theatre Group assisted such discussions by role playing the licensee and the drunken person.  They were interviewed as if on a ‘News night’ programme.

Proxy purchases of alcohol for people who are drunk are often the most difficult to police.

The number of completed evaluation forms collected was 68 (a copy of the evaluation form can be seen here), which corresponds to 43% of the persons attending this conference, similar to last year.  This becomes 52% if only the number of delegates were taken into account.

Feedback on the whole day from delegates, both written and verbal, was extremely positive and constructive.  Participants particularly enjoyed the contributions from the theatre group and many delegates identified tasks they intend to discuss and develop locally. Some suggestions for topics to be considered for inclusion in future conferences were also made.