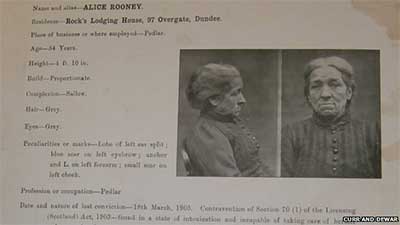 A collection of mugshots dating back to 1905, which warned publicans of drunken Dundonians, is to go under the hammer.

The folio of forms was issued to local landlords warning them not to serve the pictured people, who had been convicted of being drunk and incapable.

Forms note "riotous behaviour" by the barred drinkers, with physical descriptions including "awanting a left eye" and "wanting teeth".

Auctioneers Curr and Dewar hope they could sell for several hundred pounds.

The forms list the name, address and occupation of the pictured miscreants, most of whom are female millworkers, many of them Irish immigrants.

The collection of 40 forms was entrusted to publican John Kennedy of Polepark Road, warning him against selling alcohol to the people listed.

Among them was fish dealer John Boyd, a 46-year-old of "proportionate" build, with a "fresh" complexion, who was convicted at Dundee’s police court after he was found "in a state of intoxication and unable to look after himself" on 13 November 1905.

Under "peculiarities or marks", the report notes "left eye awanting".

Also marked was 16-year-old Margaret Devannah, a mill worker at the Queen Victoria Works, who was recognisable for having several tattoos.

She was convicted at the police court on 29 June 1905 of "behaving while drunk in a riotous or disorderly manner".

Steven Dewar of Curr and Dewar said he had never come across anything like the book of forms before.

"It was given to me by a family of publicans who have had it in the family for a number of years.

"The youngest girl in it is 16 and the oldest is 63 – they’re working-class tenement dwellers, pedlars, fish sellers, but mostly mill workers, which obviously was the big thing in Dundee at the time.

"It’s hard to know how to value it. We’ve listed it with an estimate of between one and two hundred pounds but there’s been so much interest – I’ve had two people book a place to bid by phone for it already."

The forms will go under the hammer as part of an auction on Tuesday.