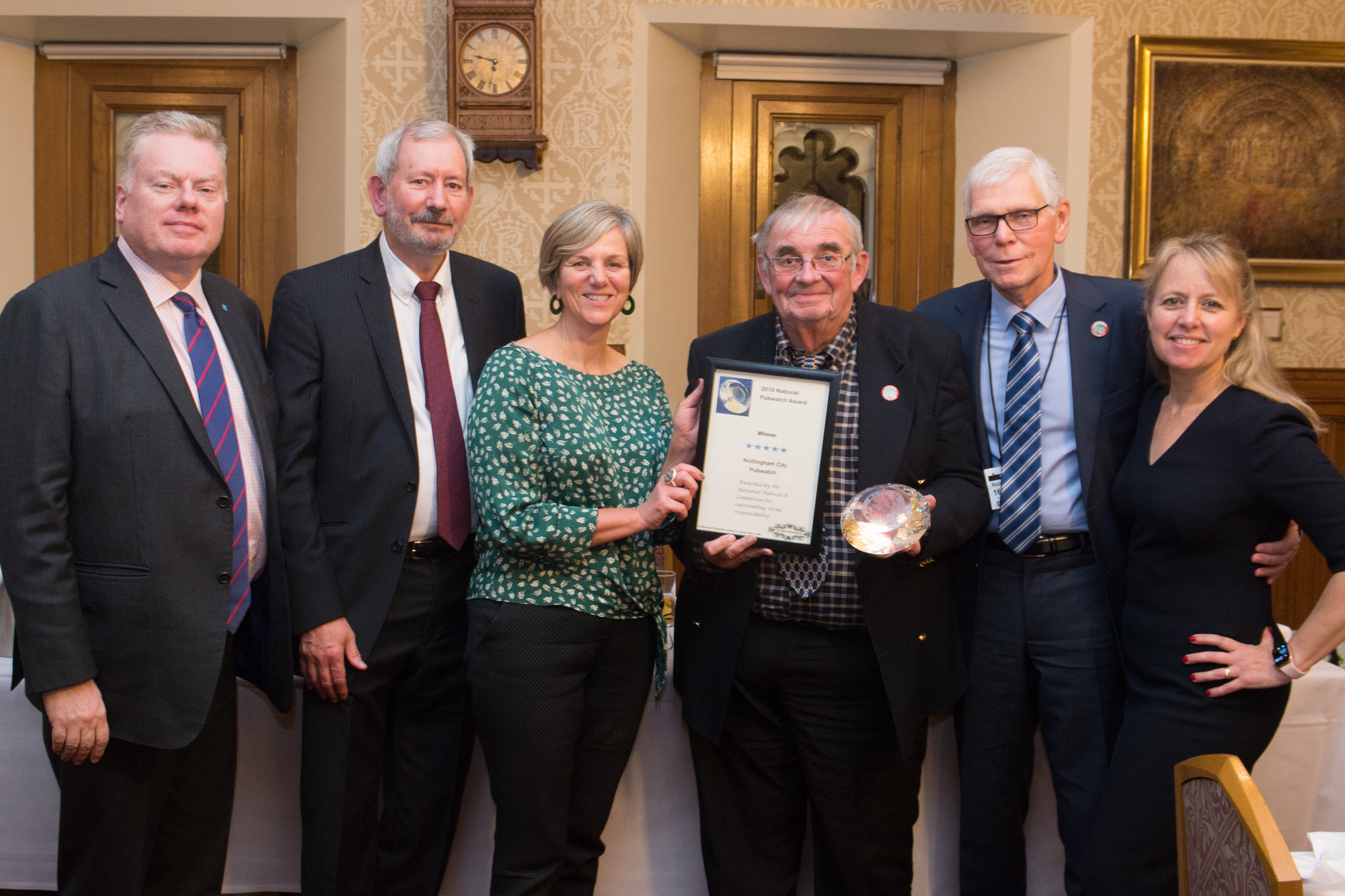 16/10/19: The Nottingham City Pubwatch scheme, has been awarded the annual National Pubwatch Award for its positive approach to partnership working and its efforts to promote safety in the night time economy.

Representatives from the Nottingham City scheme, together with other finalists, attended a prestigious House of Lords awards dinner last night, where they were presented with the winner’s trophy.
This year the awards event was sponsored by JD Wetherspoon.

Now in its eighth year, the National Pubwatch Awards champion the work of local Pubwatch schemes and their efforts to provide safe drinking environments for customers and staff in licensed premises across the UK.

Entrants are judged by a panel of National Pubwatch Committee members, who identify the scheme which in their opinion, has made the greatest contribution to its community.

Steve Baker, Chairman of National Pubwatch said: “Pubwatch schemes, continue to demonstrate that they play a very positive role in local partnership working. I would like to congratulate all our finalists for the contribution they have made to the safety of the night time economy.”

Nottingham City Pubwatch has been in operation for over 30 years and has over 200 members on its closed Facebook page.

The city centres reputation hit an all-time low in 2007, when it received adverse publicity about the high levels of crime, which impacted on student and visitor numbers.

A leisure BID was formed and Pubwatch worked closely with it and the local authorities to address various issues. As a consequence of the combined partnership approach, the reputation of the city centre has been restored.

They have initiated or supported an impressive number of crime prevention initiatives, such as the distribution and availability of defibrillators and special medical kits for use in the case of knife attacks. They have also worked closely with other organisations to promote safety in the night time economy, a significant example of that approach is their work with Drinkaware to pilot a behaviour change intervention for vulnerable customers, which has developed into the ‘Drinkaware Crew’.

The judges highlighted two specific initiatives. Firstly, the use of a cinema for meetings; a venue which has provided an ideal space to provide specialist training to large numbers of people and the screenings of training video’s including those produced by National Pubwatch. Secondly the practical and financial support given to the local Street Pastors, who benefit from an annual contribution of £2,000. 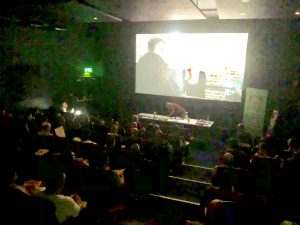 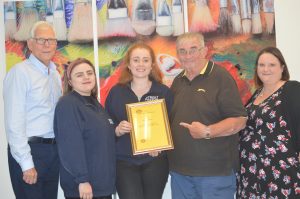 The Nottingham City application was strongly supported by several people including the Nottinghamshire Police and Crime Commissioner who praised the schemes longevity and the commitment and engagement of its members.

Chief Inspector Donna Lawton commented that the scheme was well run and worked to the spirit of national good practice. She said “Since working within the city centre, I have seen numerous innovative ideas and suggestions stem from the Pubwatch group. All of this has supported a healthy and vibrant city centre.”

And finally, Andrew Crawford the Director of the Leisure BID stated that that the Pubwatch has been the central pillar to improving the trading environment for licensed premises in Nottingham. He said “The clarity of message from Pubwatch has been fundamental to a cultural change towards better compliance at all levels, increasing the quality of operator in the city and ultimately improving the reputation of Nottingham.” 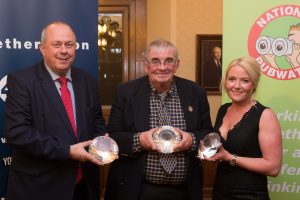 Also recognised as ‘highly commended’ at the awards ceremony where Reading and Pontypridd Pubwatch schemes.

The judges highlighted two specific Reading initiatives. Firstly, because of concerns about the national increase in knife crime, the Pubwatch has encouraged members to adopt a full searching policy as a condition of entry. The Committee has in conjunction with the police, updated the Standard Operating Procedures for the seizures of drugs and weapons and have provided venues with metal detector wands. A number of weapons, including knives and knuckledusters have been seized and the owners detained by police. Secondly because of the reduction in police officers available to patrol the streets in the early hours of the morning, the Committee persuaded most members to adopt a dispersal policy where door staff wearing high-viz jackets ‘police’ the street some 15 minutes after their venue has closed to ensure safe dispersal of patrons away from the area. 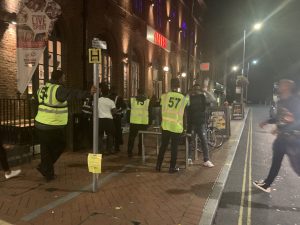 The judges also highlighted two specific Pontypridd initiatives. Firstly, the work around safeguarding and vulnerable people, particularly the introduction of an Ask for Angela campaign and the promotion of additional training for bar and door staff. Secondly the supporting relationship with Pontypridd BID who attend meetings and help to promote the role of the Pubwatch; an example being the willingness to utilise their new large interactive screen in the town centre to display Pubwatch messages. 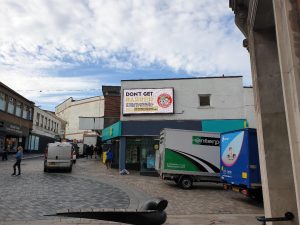