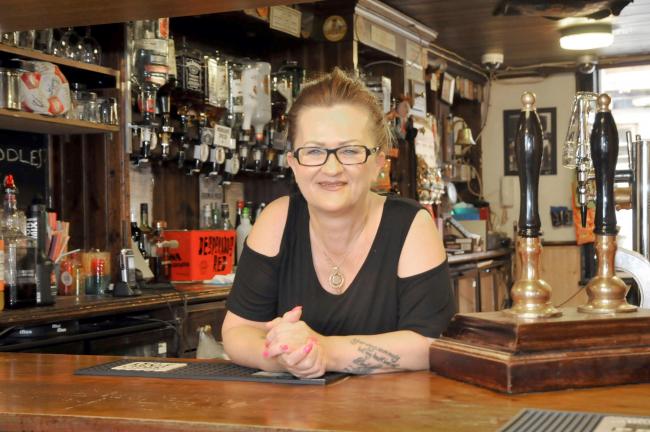 AFTER 13 years spent at the helm of Porters Ale House, Sinead Dooley know only too well the importance of working together.

Since the mum-of-three started work at the public house on Buttermarket Street, she has played a vital role in the development of a pub safety scheme which aims to tackle troublesome drinkers and protect revellers.

“It was a no brainer to join,” said Sinead, who is the chairman of the town centre Pubwatch scheme.

“The best part is we all work together. I guess you could say it is like a family – a support system.

“We all want what is best for each other and for those who walk through the pub doors.”

The catalyst behind the scheme’s success is linked to the wealth of information available to those who sign up and agree to abide by the code of conduct agreed by members.

This information is then discussed at regular meetings throughout the year.

It is during these meetings where members decided if someone should be banned from drinking in town centre establishments signed up to the scheme.

“We all have to agree. This is to make sure it is fair and one person does not have a vendetta again another,” added Sinead who is the deputy premises supervisor for Porters Ale House.

In recent months, the town centre nightlife has hit the headlines after officers at Cheshire Police carried out a series of raids at drinking establishments as part of the force’s crackdown on drink, drugs and anti-social behaviour.

Sinead denied that this has caused tension between officers and those working in the night-time economy – in fact quite the opposite.

Officers regularly attend the Pubwatch meetings to ensure both parties are working together.

“I have a family and I want to make sure if they go out then they come home at night.

“This is the same for every customer who walks through our doors.

“That is why we imposed a minimum drinks’ price six years ago.

“There are plenty of good news stories to celebrate too.

“The Feather’s and Dead Eyes have been awarded the ArcAngel award.”

According to the Pubwatch website, there are seven schemes in operation in Warrington including one based in the town centre.