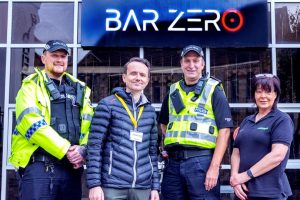 A new initiative to tackle anti-social behaviour is launching this weekend in a Lanarkshire town centre.

Due to a recent rise in incidents outside pubs in Hamilton, taxi marshals are being brought in to help keep locals safe in the area.

The move is being funded by the town’s Business Improvement District (BID), Hamilton Our Town, who have teamed up with Police Scotland and nearby pubs.

The collaborative effort aims to ensure pub-goers and members of the public are looked after at the weekends.

It comes after incidents of anti-social behaviour have reportedly increased in recent months, causing concern for locals and businesses in Hamilton town centre.

An alliance of pub owners named Pubwatch has been instrumental in securing the taxi marshals, and the group are pleased to see positive action now being taken.

Starting this weekend (Saturday, July 2), two specially trained taxi marshals will be brought in to be based at the taxi rank in Hamilton’s Bourne Street, and neighbouring Keith Street.

They will be stationed around the vicinity of the taxi rank and outside some of the local pubs such as Bar Zero and the ROC nightclub.

The workers are from security firm Frontline Security 24/7 and will be liaising with local police in the area to ensure any incidents or anti-social behaviour are dealt with promptly.

Manager of Hamilton BID has welcomed the move.

He told Lanarkshire Live: “It’s an initiative between Hamilton Our Town and Pubwatch.

“There’s been an increase in incidents in the past couple of weeks, so we want to make sure the public are given a great experience in the town.

“This is really important over the summer for the hospitality sector that they do well, while the public are kept safe.

“We also want to make sure Hamilton is a nice place for visitors to come into and feel safe as well.

“They will be there to engage with the public and reassure people who are out at the weekend that there is someone there professional that can deal with any issues that come up at pace.”

The taxi marshals will be in place throughout the summer, however this may be extended depending on future funding.

Local pubs have also welcomed the news including Bar Zero, where owner Rebecca Laughlin is co-ordinator of the area’s Pubwatch group.

She has been involved in partnering with Hamilton BID to look after the safety of punters and the general public.

And John Mulvaney, landlord of Mavrix Bar in the town centre, was also involved in pushing for the taxi marshals initiative. He said: “A massive thank you Malcolm for all your support from Pubwatch Hamilton. This is vital to our trade.”

Looking ahead, Malcolm explained he hopes people will now feel safer when out in Hamilton and see less incidents occur.

He added: “This could have a big impact throughout Hamilton as anyone potentially involved in anti-social behaviour may think twice about it once they see there is proper stewarding in place.

“We will monitor the situation and hopefully we will see a decrease in these incidents.