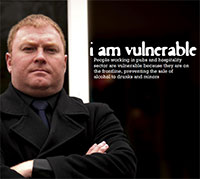 Did you know that the Sentencing Council considers it to be an aggravating factor to assault someone who is ‘providing a service to the public’? And would you ever have thought that working behind a bar or providing door security would place you in this category? No we thought not. And to be fair it’s probably not something in the forefront of every police officers mind when they are deciding whether to charge or more often than not – caution an offender.

However this is quite an important issue for Pubwatch members because you are literally on the front line; the gate-keepers if you like, who should be preventing the sale of alcohol to the under-age or drunks. Fail and you could face sanctions and possibly lose your livelihood; act responsibly on the other hand and refuse the sale and you may have to deal with someone who might not take kindly to the rejection and could lash out.

We know that most people accept that there are risks associated with working in the Night Time Economy – however we believe that when things go wrong you should expect to be supported by the Criminal Justice System. We thought that it might be useful for people in this situation to be aware of exactly how the Sentencing Council view this issue.

In 2011 the Sentencing Council published their response to a public consultation on Assault Guidelines. National Pubwatch had participated in this consultation because of our Court Not Caution campaign and we posed a number of questions, which included a question on the status of bar and door staff. Rt Hon Lord Justice Leveson, Chairman of the Sentencing Council said "There were some requests to clarify that the aggravating factor ‘offence committed against those working in the public sector or providing a service to the public’ encompasses workers in any form of employment, such as shop workers and those working as bar staff or work providing security in pubs and clubs. The Council considered this, but concluded that the existing wording provides sufficient clarity for sentencers and that it was clear to sentencers that those workers providing any form of service would be covered by this factor."

This does not mean that in every case the Police will charge, but we think it’s important that when they are making the decision that they fully consider the full circumstances of the offending behaviour and the impact on the victim.

We have produced a poster to remind Pubwatch members of the importance of not only reporting all cases of assault but also to ensure that the investigating officer has a full understanding of all the aggravating factors? For example is the officer aware that you are providing a service to the public; did the offender pre-plan the attack; was there more than one person involved etc.

In addition does the officer know how the assault has affected you? Under the Victims Code you are entitled to make a Victims Personal Statement at the same time as you make a witness statement to explain what happened when the crime took place. A VPS is different from a witness statement which mainly focuses on the crime against you, such as what was said or what you heard in the incident, rather than the impact of the crime on you. A VPS is a statement that you can give the police (or any other agency or organisation assigned by the police to take the VPS on their behalf) if you have been a victim of crime. It is your way of telling the criminal justice system about the crime you have suffered and the impact it has had on you, whether physically, emotionally, psychologically, financially or in any other way. Your VPS is important and gives you a voice in the criminal justice process by helping others to understand how the crime has affected you.

We hope that you never have a problem; but just in case something does happen in the future please display the poster ‘back of house’ for the information of your staff. We know the picture looks like a doorman and someone who can look after himself, but that’s the point – everyone can be vulnerable sometimes.