Ashley Nicholson of Crumbs & Cocktails is hoping pubs and bars across Ayr town can create a group to maintain a safe social scene for customers and staff. 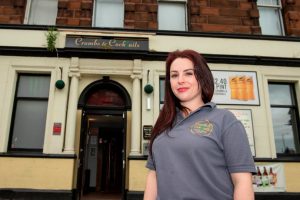 Crumbs & Cocktails bar owner Ashley Nicholson is hoping other pubs and groups across Ayr town can link up to form a Pub Watch (Image: Ayrshire Post)

A bar boss is leading calls to boost safety on Ayr’s pub scene.

Ashley Nicholson, who owns Crumbs & Cocktails on Smith Street, is hoping venues across the town can club together.

She wants to create a group to maintain a safe social scene for customers and staff.

Her call follows reports and CCTV footage of a man in a hi-vis vest loitering outside the pub, allegedly claiming he was ‘Crumbs security’.

The Pub Watch scheme aims to tackle and prevent crime and anti-social behaviour within licensed premises by communicating with each other about any issues, incidents and potential problems.

Ashley who has run Crumbs for eight years, said: “I definitely think a Pub Watch scheme would help.

“It might make people feel a bit more prepared and encourage good behaviour.

“Me and Drouthy Neebors will call one another if we’ve had a particular group in or anything that we think ‘no that behaviour wasn’t acceptable’.

“Taxi drivers also put themselves in a vulnerable position so it doesn’t necessarily have to be just for the pub trade as there’s a few different bodies who can be involved. 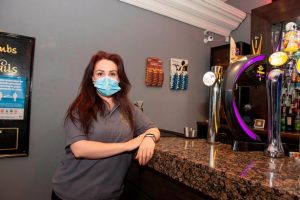 “Everyone is looking for business just now but I think, especially because we have got a few people coming from other areas, it would be quite good to have a wee heads up.

Ashley posted a clip of the man claiming to be security on social media to flag he is not affiliated with them and to let others know the pub is a safe place should anyone need assistance.

She said: “I was definitely concerned.

Because he was saying he was Crumbs’ security, we decided to put it on social and [for them to] know that he was not security for the pub.

Now, the bar boss is hoping pubs, restaurants and other bodies can create a WhatsApp or Facebook group for owners or staff to drop messages into.

She added: “It’d be great if there was a place where each owner or regular staff could put in a message saying ‘this person has done this or that’.

“That’s something I struggled with when I first opened because when you open a new premises in the town you don’t get a book of people who are known to cause issues.

“You have to go through this whole process of having people in, barring people and it sometimes it goes on a long time.”