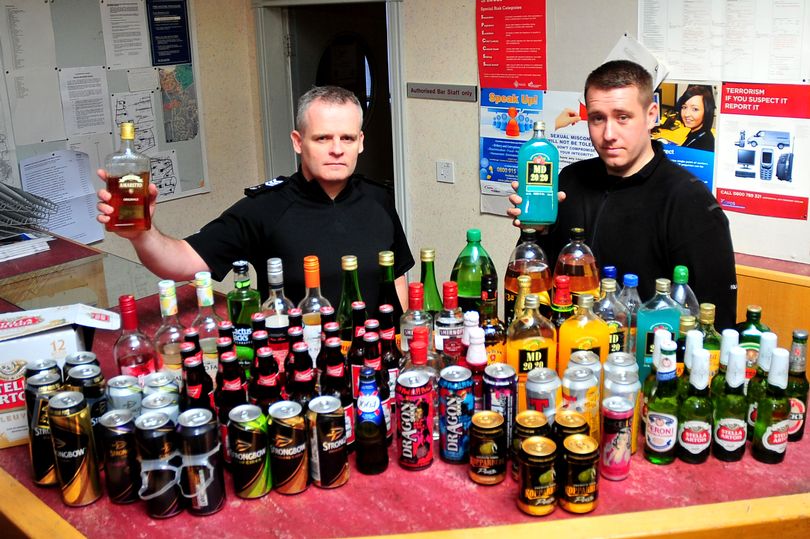 Balloch police officers seized a haul of booze from teenagers in Balloch Park in spring 2015.

An innovative bottle marking scheme to prevent shops selling alcohol to teenagers is helping curb disorder in Balloch. Shops in West Dunbartonshire started tagging bottles of alcohol with an invisible code, enabling them to be traced back to where they were bought, as part of a police plan to cut underage drinking and target violence.

Licensing officers say they were able to stop youth disorder near a guest house in Balloch after finding out where they were buying their booze and then deploying police to those areas to halt the purchases. They say it led to a substantial reduction in incidents. The Loch Lomond setting can be a hotspot for underage drinkers who flock there during the summer months.

Almost 200 litres of booze was seized from Vale of Leven Academy pupils in May when officers busted their annual muck-up day ritual. In order to ensure premises arent selling booze to underage kids, test purchasing has also been carried out across West Dunbartonshire. Out of 63 tests, only one resulted in the illegal sale of alcohol. The initiatives are just two licensing officers in West Dunbartonshire, home to 236 licensed premises, have implemented over the last year to control alcohol related crime.

A report which went before the councils licensing board yesterday (Tuesday) provided councillors with an update on what measures are being taken to prevent crime before it happens. It reads: The licensing standards officers are constantly apprised of developments in premises by the licensing sergeant and where appropriate joint visits are carried out to resolve issues at the earliest possible stage. An example of this was a licensed premises in Dumbarton that was the locus of numerous incidents of violence and disorder. The joint work between the police and the licensing standards officers meant the premises licence holder was provided with an effective plan to change the way the premises was managed. It states this support enabled a major change in the management culture in the premises and led to a major improvement in the behaviour of patrons.

The areas successful Pubwatch scheme, which allow pubs to support one another by banning violent individuals from all premises in the scheme, has also expanded. Dumbarton and Vale of Leven Pubwatch groups have teamed up with Helensburgh Pubwatch, which means information is now shared between all three. The report states this has already led to several violent individuals being barred from pubs in these areas.

The report says serious and organised crime groups still pose a substantial risk in West Dunbartonshire, adding that they have a particular interest in the licensed trade. It adds: The licensed trade, particularly on sales, is viewed as an area of interest to such groups due to their primarily cash orientated business model and the ability to launder money from the proceeds of crime in such establishments. The Police Divisional Licensing Team have put in place a robust process to ensure checks are carried out in relation to all relevant applications and particular attention is paid to those which may be of interest to organised crime groups. There is still work ongoing around this group and it is anticipated that all connections they have with licensed premises will be removed. This will affect their ability to launder the proceeds of their criminality.