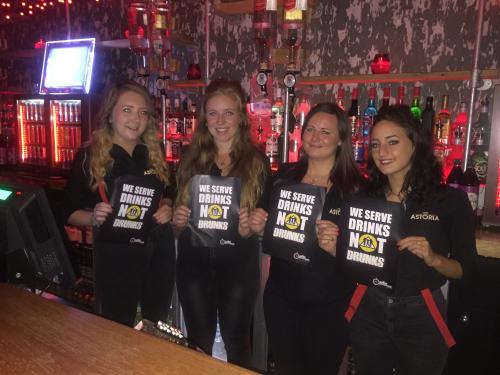 Bar staff at the Astoria support the campaign.

With a new influx of students to the city, and many big nights out being planned for the autumn, a new initiative is being launched in Portsmouth to tackle drunk and rowdy behaviour. Bars and clubs in the city will be reminding staff to spot drunks and to refuse alcohol sales to them. This initiative ‘We Serve Drinks, Not Drunks’ organised by the Safer Portsmouth Partnership is working with venues based within the main entertainment areas of the city, Albert Road, City Centre and Palmerston Road.

The Royal Navy Police are also supporting the campaign in their mess bars on the Naval Base. Venues supporting the initiative include Yates, The One Eyed Dog, The Golden Eagle, The Wedgewood Rooms, The Northcote Hotel, Drift Bar, Three Bar, The Lord Palmerston, The Fleet, The Astoria, The Liberry, Hong Kong Charlie’s and Owens.

The posters and badges stating ‘We Serve Drinks, Not Drunks’ remind bar staff and customers alike that it is illegal to sell, or allow the sale of, alcohol to someone who is drunk. The offence can lead to a fine of up to L1,000.

Alan Knobel, Alcohol Strategy Manager explained, The aim of the campaign is to reduce the number of incidents of disorder and anti-social behaviour linked to people getting very drunk. The campaign encourages bar staff to consider what the consequences of selling alcohol to a drunk might be later on in the evening.

Gemma Sands, City Centre, Pubwatch Chair said “As a hospitality driven industry our fundamental goal is to ensure that everyone who spends time at our venues have the best experience possible. Preventing people from becoming too intoxicated and as a result possibly spoiling the night for others is something we all feel strongly about. The issue we find ourselves facing is that pre drinking has now become a social norm, therefore people are consuming a fair amount of alcohol at home before heading out to the bars and clubs in the city. By the time they are within our venues and purchasing what appears to be their first drink of the night they have already had a cocktail of unmonitored drinks which we are not and cannot be aware of. Our advice is that people enjoy their night safely and pace themselves, after all, what is the point in having a great time if you cant remember it in the morning?”

Photograph and story courtesy of About My Area www.aboutmyarea.co.uk