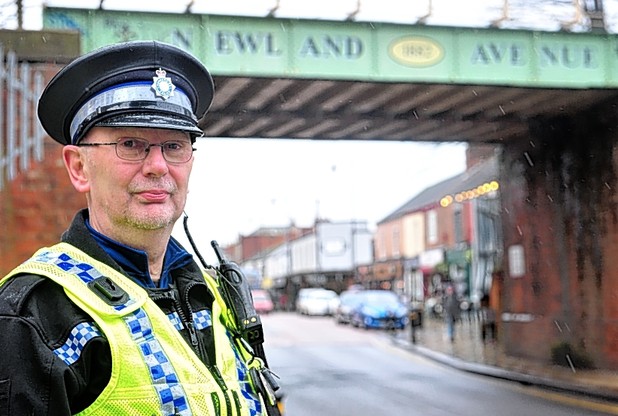 PLEA TO WORK TOGETHER: PCSO Noel Horseman in Newland Avenue.

PUBS and bars in Hull’s popular Newland Avenue are to be invited to join a new Pubwatch scheme in the wake of a street brawl. PCSOs will hand deliver letters to licensees tomorrow inviting expressions of interest for the scheme.

CCTV captured revellers being stamped on and kicked during a fight involving several people outside The Piper following a Boxing Day night out. PC Andy White is urging licensees to get involved in the scheme.

He said: "On the back of what happened outside Piper, it seems the perfect time to be launching a Pubwatch scheme in the avenue. "Newland Avenue is a great cosmopolitan spot, with lots of nice pubs and bars and a good mix of shops. It’s a great place to show off, especially with UK City of Culture 2017 just around the corner. "But we need to keep it that way. Problems will discourage good people from going to these places, which no one wants to see."

PC White, who plans to run the scheme with PCSO Noel Horseman, said a second letter will be sent to licensees inviting them to a meeting in February or March.Under the scheme, licensees would be made aware of any trouble-makers so they can alert door staff.

"We ran a similar scheme when I worked at Kirk Ella," said PC White. "That Pubwatch covered the Cottingham, Kirk Ella and Willerby area, and worked really well. "We had a ring-round system in place, where a licensee or door supervisor could get on a radio and say, ‘Right, we’ve just ejected a man, muscley build, wearing a red T-shirt, for fighting inside our venue. Be on the lookout.’ "Other licensees may then choose to stop that person entering their bar, potentially preventing that person causing further trouble. "This is what we want to replicate in the Newland Avenue area."

Sarah Jeffrey, licensee of Ruby Lounge, gave the proposed scheme a cautious welcome. "We have tried to start a Pubwatch here numerous times," she said. "But only myself and a couple of others bothered to turn up to meetings. It will only work if everyone gets involved."

PC White said 12 people will answer police bail in mid February in relation to the brawl outside Piper.