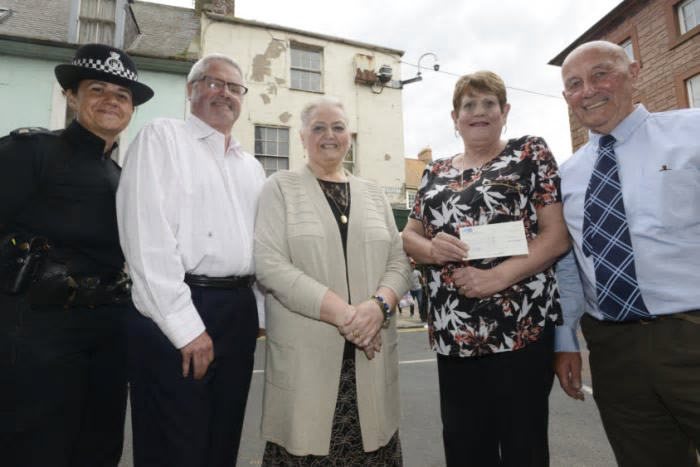 Pictured at the handover of the £1000 cheque are, from left, Insp Liz Hall, Cllr Paul Hodgson, publicans Brenda Collins and Margaret Straughan and Cllr Gordon McLean with the CCTV on the corner of Church Street in the background.

Publicans have welcomed the new CCTV system which is now up and running in Berwick town centre.

Members of the Pubwatch scheme and Berwick branch of the Licensed Victuallers’ Association contributed £1,000 to the cost of the project.

The organisation had raised concerns about the lack of CCTV coverage last autumn after it emerged the old cameras were no longer working.

Margaret Straughan, chairman, said: “We had some money in the bank account and wanted to put it to some good use.

“I’m pleased that they’ve managed to get it done quite quickly, not just for us as publicans, but for the people who use the town centre.

“We don’t have a lot of trouble in Berwick but I have to add that I wouldn’t have a bad word to say about the police here when the cameras were off. They were always there for us.”

The work, which was undertaken on behalf of Berwick Town Council by AGS Safety and Security, was completed earlier this month.

It involved taking down the old cameras, putting IP cameras in their place and converting from fibre to copper using the existing infrastructure of the cable.

Cllr Gordon McLean said: “I’d like to thank the Pubwatch members and the LVA for supporting the council in getting the cameras. They will be very useful additions to help keep the town safe in the future.”

Cllr Paul Hodgson added: “This was an issue raised at a time when anti-social behaviour was becoming an issue because people were aware that the old cameras were not working any more.

“We appreciate that the police are sometimes a little bit thin on the ground and we felt it was the right thing to do for the safety of our residents and tourists.”

“The cameras are where they have worked well in the past so I don’t see any reason why they can’t do so again in the future.

“They proved themselves to be very useful last week when we were trying to track down a woman who had gone missing. Our front office staff were able to pick her up on the cameras which was fantastic. That shows that they’re not just about criminal activity. They can play an important role in other areas.”

In addition, police will soon be able to access CCTV footage on hand-held tablets enabling better awareness of major incidents as they are actually happening.