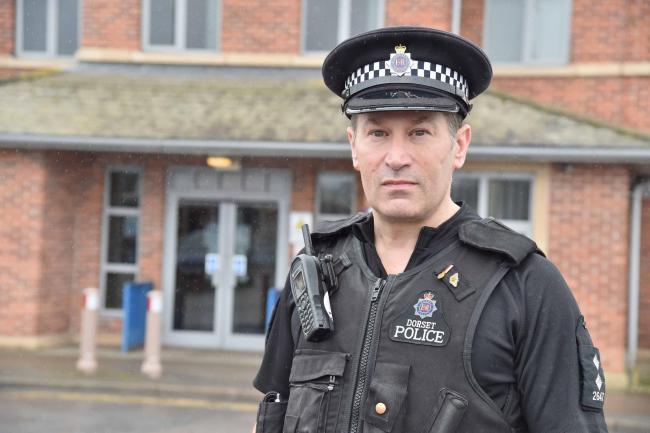 BRIDPORT Inspector Mike Darby is leaving the Bridport section at the end of this week after four years in the job.

He will go on to take over the Dorchester division. He will be replaced by Insp Neil Wood in a few months.

During his tenure, Insp Darby has witnessed some impressive results – Bridport’s crime rate has the lowest increase across the force and scored top marks for customer satisfaction.

He said: “We have achieved a lot in four years. Bridport section last year was the highest section in the force in relation to satisfaction across all but one of the five areas we are measured on – such as keeping people informed and ease of contact with police.

“Additionally, we have the lowest crime increase across the force and we are the second highest in our positive outcomes.

“Also, this time my staff have worked very hard in forming good partnerships in our community and working hard to ensure that victims are supported.

“The reason we have done so well is that the officers have been very positive in identifying best ways to investigate crime and support victims and they have achieved some excellent results because of it.

Ins Darby is proudest of being able to solve some long-rooted problems in the area with a combination of inter-agency co-operation and help from the public.

He said: “By working very closely with many partners from social services to West Dorset District Council and others and with dedication we have achieved some excellent results that have undoubtedly improved the quality of life for people living in the Bridport area.

“We clearly have some new challenges facing us – mainly the drugs networks from London and Liverpool that are moving into our part of the country.

“We have already had some spectacular results in targeting them and this will continue with the ongoing support of the public.”

He said it was gratifying to see people are now more willing to ring with tip offs and the activity especially as the activity of these gangs is so open and obvious.

He added: “They don’t have connections in the area and they are having to go to drug addicts’ addresses and their comings and goings are quite obvious.”

Another success, he said, was the reduction of antisocial, alcohol-related behaviour at weekends.

He said: “A number of years ago there were significant public order problems and fights used to occur on a regular basis.

“The neighbourhood policing teams over the last few years have been working very closely with the Pubwatch Scheme and ensuring people who drink and cause disturbances are managed effectively and kept out of the pubs in Bridport.

“The result is that violent incidents at weekends have dropped significantly.

“We are hoping to extend the Pubwatch scheme to Lyme Regis in the near future.”