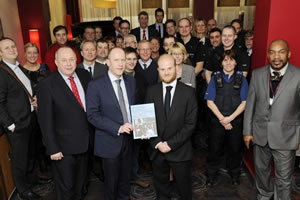 Late night venues will pay an extra levy to help reduce crime and disorder and improve safety in the town centre, if a new Business Improvement District (BID) is given the go-ahead. The cash would pay for a mobile first aid centre, taxi marshals, street pastors and schemes to ensure pubs and clubs are run safely.

The proposals are outlined in the business plan renewal proposal for the Reading BID 2014-2019, launched at the Novotel, in Friar Street on 9/1/14. The current BID comes to an end at the end of March and businesses are being asked to vote for a new scheme. Retailers in the BID area pay a one per cent levy on top of their business rates, which pays for services and activities beyond those provided by Reading Borough Council and the police. The proposal for the new BID would require venues operating after midnight to pay an additional two per cent levy, which would raise about L52,000. BID manager Bobby Lonergan said: The demand for this came out the consultation when late-night premises said they would like a comprehensive night-time element. The extra cash would be ring-fenced to pay for a First Stop Bus offering first aid treatment and a place of refuge, taxi marshals to manage queues at taxi ranks, street pastors, Pubwatch and Doorwatch schemes, a Best Bar None scheme to ensure best practice and an application for Purple Flag accreditation which recognises excellence in the management of town centres at night.

Danny Fraifeld, co-owner of the Purple Turtle, has given the scheme his support, saying: We place a very high premium on safety and security and thoroughly endorse what the Night Time Programme will bring. Steve Belam, general manager of The Oracle and chairman of Reading UK CIC, reminded guests at the launch what the BID had achieved in the nine years it has been in operation. He said: The BID has transformed Reading town centre by providing the funding to ensure Reading is a good place to do business. Cast your mind back nine years to a time when Reading didnt have spectacular Christmas displays, when the streets were paved with chewing gum and security in the town was much less visible. This was the situation in Reading before the BID and is what we stand to lose if we do not renew the BID for another five years. Over the last five years the BID has delivered 25,000 extra PCSO hours, a CCTV operator, Christmas lights, events, deep cleans, a cardboard collection service and floral displays.

A consultation to put together the new BID called for more security, better communications, a more attractive town, more business, more night-time services and to be more ambitious. Adam Jacobs, owner of Jacobs jewellers, said; Without an attractive, secure and well promoted town centre, Reading will lose its vibrancy and its appeal to both customers and businesses. Our town centre is on an upward trajectory and a continuation of the BID is an essential ingredient in ensuring its continued success. More than 480 businesses and organisations within the town centre BID area will have the chance to vote on a renewed BID in a ballot between January 23 and February 20. If successful, the new BID would take effect from April 1, 2014.