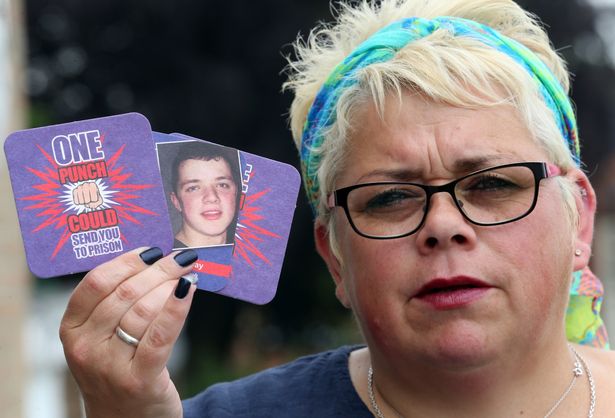 The mum of a teenager who died after being hit with a single punch has helped launch a campaign to highlight the damage a single blow can do.

Kristian Thompson of Burnopfield County Durham, was just 18 when he was felled outside a nightclub in Consett in September, 2010, suffering a serious head injury. He died 10 months later at the age of 19.

Before Kristian died, Mark Berry, from Leadgate, near Consett, was sentenced to 28 months in prison after he pleaded guilty to causing grievous bodily harm at Durham Crown Court.

His mother Maxine Thompson-Curl, 50, said: “No family should have to go through what I have been through.

“Kristian was my whole world, the light of my life, he was just 18 when he was punched. My life is empty without him.”

As part of it, pubs and bars in Chester-le-Street which are Pubwatch members have agreed to distribute beer mats which show Kristian’s face with a message urging people to walk away from drunken violence.

Maxine said: “He is my drive, my passion is to raise awareness of what can happen from a single punch. So many lives can be ruined.

“There is so much talk about weapons, but the most dangerous weapons can be the fist at the end of your arm.”

PC Claire McNaney, of Durham Constabulary’s alcohol harm reduction unit said: “Even if this stops one person from getting into a fight and potentially saves one life that for us is a massive win.”

Mr Hogg said he was pleased the beer mats would be distributed ahead of Euro 2016.

He said: “We need to get the message out, when people are out drinking in the pubs watching the football, it is going to be a busy time for licences premises and the police.

“People need to be able to go out and enjoy themselves and go home safely.”

Maxine said she was “overwhelmed” by the support of the Chester-le-Street Pubwatch branch, who offered to pay for promotional material and work to get the message out in Consett, where Kristian was attacked.

Chairman David Dagg said: “Kristian was an innocent person, who due to a split second decision of violence became a victim. We fully support the One Punch campaign to warn people of the consequences that may occur while on a night out.”