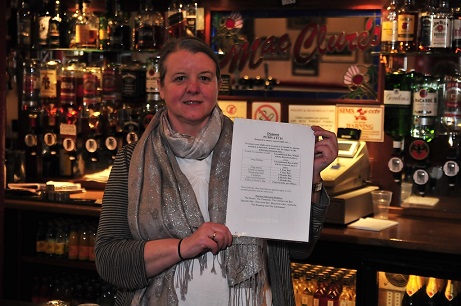 AFTER a few years absence Dunoon’s Pubwatch scheme is back and local bar owners are warning customers that abusive behaviour and the use of fake IDs, within their premises, will not be tolerated.

The majority of local publicans have teamed up with Dunoon police and are using social media to aid them to promote safety in their pubs, bars and restaurants. A private messenger group has been established between the landlords who then inform each other online of the activities and behaviour of certain problem customers they may have on their premises at that time. Pictures of offenders, lifted from social media accounts, are immediately circled by members so instant action can be taken.

Owner of McClures Bar, Liz Donovan attended the very first meeting of Pubwatch on February 5th and was delighted the scheme has returned after a long absence.

She said: ‘Pubwatch was re-established in November but our first meeting took place earlier this month which was a great success. For example in the short time that we’ve resumed the scheme we agreed on a two year ban for one individual, a three month restriction for another and a behavioural warning letter sent out to a customer informing them that they are now on the Pubwatch radar and any further offence or bad behaviour will result in a ban.’

She added: ‘If someone finds themselves banned from licenced premises through the Pubwatch scheme, that’s exactly what that means. They will be banned from gaining entry to any establishment selling alcohol, either for a meal or to attend a private function like a party or wedding. I don’t think people realise how much of wide reaching effect a Pubwatch ban could have on their social life.’

But it’s not just issues with the anti-social actions of customers which will be examined by the scheme as the use of fake IDs by patrons will also be under heavy scrutiny too.

In a situation where someone has used another person’s passport as a form of identification in a licenced premises the passport can be legally confiscated by the bar owner, who then hands it to the police, who will pass it on to the passport office where it is destroyed. The original owner then has to reapply for a replacement at a cost.