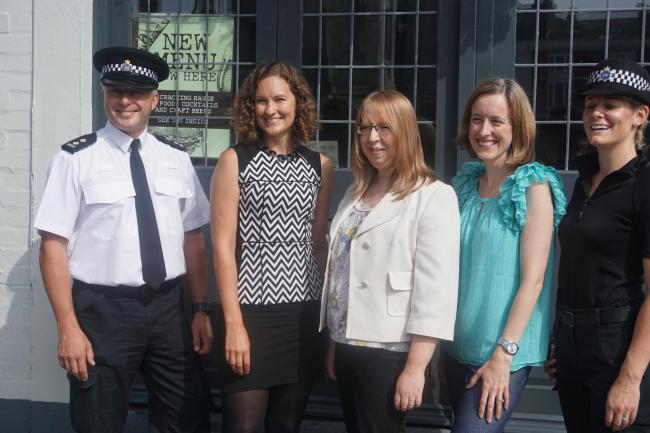 DRUNKEN revellers could be breathalysed and turned away from Weymouth nightclubs in a bid to crack down on alcohol-related crime.

As part of a joint project from Dorset Police and licensed premises, pubs and clubs across the town will have the power to breathalyse punters in a three-month pilot scheme to be monitored by leading sociologist.

The #RU2DRUNK initiative aims to tackle the culture of ‘pre-drinking’ in which a growing number of people consume excessive amounts of shop-bought alcohol at home before arriving in the town centre.

Weymouth Neighbourhood Inspector Pete Browning said: “By trying this scheme we can begin to change that pre-loading culture. We are not trying to stop people having fun; we want to benefit the night-time economy of the town whilst reducing alcohol related crime and making sure people get home safely.”

Each machine costs £250 and has been jointly funded by the Office of the Police and Crime Commissioner and Weymouth BID.

Insp Browning said Dorset Police are looking to replicate two previous pilot schemes in Torquay and Norfolk that have so far proved effective.

University of Exeter Sociologist Dr Hannah Farrimond, who is evaluating the scheme, said: “It’s not about deterring drinking; it is about promoting moderate drinking. Torquay and Weymouth are similar seaside towns, they have a similar influx of tourists in the summer and they are well known for hen and stag do’s and lively night time culture.”

This morning PC Holly Damen and Insp Pete Browning attended a Weymouth Pub Watch meeting to distribute the breathalysers to the 29 premises taking part and demonstrate the kit.

PC Damen, who initiated the scheme, said: “The benefits are multiple. Results from the Torquay pilot scheme show police experienced a 39 per cent reduction in alcohol-related crime.

“It helps reduce the number of fights because the machine de-personalises the conflict, rather than argue with a bouncer people respond to the machine saying yes or no.

“We also hope to reduce the demand on the ambulance service and the number of people admitted to Accident and Emergency.”

Pub landlords have been told setting the alcohol limit and refusing entry is to be their discretion, with an emphasis put on aggressive or troublesome behaviour.

Keith Treggiden, Chairman of Pub Watch, said: “Pubs, clubs and bars bear the brunt of the issues associated with people coming out late; it makes businesses more vulnerable, with poor trade as a result of excessive pre-drinking imposing the threat of closure.”

Whilst it may help boost profit margins other venues have mixed opinions about the scheme.

Phillipa Holt, promotions manager for Actors and Levels, said: “In some ways it will benefit us for insurance purposes to prove false accident claims, but as a negative I don’t think it will be very practical to implement as it is just going to be too time consuming for bouncers.”

The three month scheme will start on Friday, September 16 with the evaluation beginning after the first month.