The chair of Droylsden pubwatch has been awarded after leading the charge to turn around the town’s pub scene. 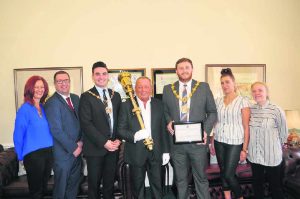 Alan Graham, also chairs the wider Tameside pubwatch, replicating the success in Droylsden across the borough. Droylsden pubwatch was formed in 2012 on advice from local police.

Alan was invited by the Civic Mayor of Tameside, Cllr Leigh Drennan, and his consort Cory James, for an afternoon in the parlour to present a community award.

He was joined by other members of pubwatch and Droylsden East councillor David Mills.

Cllr Mills said: “I was very pleased that the mayor agreed to my request to award Alan Graham, chair of Tameside and Droylsden pubwatch, a community award on behalf of the borough. We all had a wonderful afternoon in the parlour and once again thank you to Mr Mayor and his consort.

“Alan and his staff have worked extremely hard over a number of years to re-launch Droylsden pubwatch and then create Tameside pubwatch, of which I was also personally involved, to bring together licensees to ensure the safety of all our pubs, restaurants and clubs within Tameside.”

“I hope the Pubwatch community stays strong and we continue to work together alongside our partners in the police and council to ensure the safety of all our licensed premises, the patrons and their staff.”

NPW Editor: Our congratulations to Alan. In 2014 Droylsden were winning finalists in our annual Pubwatch Awards and in 2016 we honoured him with our own Award of Merit.