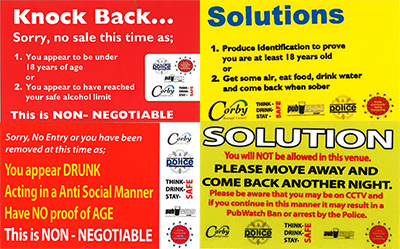 Refusal can often offend – so Corby Pubwatch members are softening the blow and attempting to defuse conflict situations by issuing Knock Back cards to customers who are being refused entry or service in their premises.

Chair of Corby Pubwatch Mick Willey informed NPW that the idea for the cards was formulated some 9 months ago as they understood that knocking back customers at the bar could often result in a conflict situation. He says that the idea is to limit your engagement with a customer who is being refused service in a busy venue. All that is required is for a member of bar or door staff to hand over a Kick Back card at the same time as giving a polite refusal of service.

He said The cards have a positive effect that the person receiving them are occupied for a few moments reading the card and understanding the reason they will not be served, i.e. You appear under 18 years of age, or you have reached your safe alcohol limit. The card also gives the person solutions e.g. produce a valid ID proof of age or get some air, eat food, drink water and come back when sober.

Over the last nine months the use of, Knock Back Cards have proved a very successful tool and as a result we have now introduced Knock Back Cards for refusing entry into late night venues. These are handed out by Door Supervisors, often in a queuing situation, and allow the customer to move off. These cards inform the customer at an early stage they are not being allowed entry because they appear to be drunk, acting in an anti-social manner or have no ID proof of age. These cards have solutions on the rear. They also warn the customer of CCTV, possible Pubwatch ban or arrest. Again these are also proving very useful. I can assure you they work!