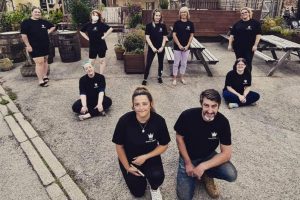 Pubs in the Holderness area have issued around 15 pub bans since lockdown eased last month.

Last week, Humberside Police said the force was out handing over the bans to those involved.

Since lockdown began to ease last month, there have been a number of incidents of drinkers failing to social distance.

During one shocking incident at the Wetherspoons Blue Bell pub in Scunthorpe, police had to use tasers and wrestle customers to the ground after they failed to social distance when asked.

Both staff and police officers were assaulted during the incident.

While pubs in Holderness are delighted to welcome back customers with the vast majority behaving themselves and enjoying having a pint in their favourite local, it has not been without problems.

Since pubs could reopen, the Holderness Against Nighttime Disorder (HAND) group has issued around 15 bans – and many more warnings.

HAND covers many pubs in towns and villages including Hedon, Paull, Thorngumbald and Camerton.

She said: “There are about 15 people banned right now which is a bit more than normal.

“To be honest, it has been great to have opened again since lockdown but there have been one or two issues and everyone came out all at once.

“Quite a lot of people have turned 18 during lockdown so there have been plenty of people out celebrating and not always very experienced drinkers – so that can be an issue.

“It has been hard telling people they need to social distance and have masks on walking round in the pub and that has caused a few issues.

“At the end of the day we don’t want to be fined for not adhering to the rules so we need to enforce it.”

Miss Minns explains how the system works with HAND.

She said: “If we catch someone using drugs then it is an automatic two-year ban but people can also be banned if they commit any violence or are abusive to staff or other customers.

“Pubs can issue their own bans but it works very well with other places. If something happens in our pub we can warn others.

“We tell the police the names of those banned and get photos which we can share with the police and other pubs to create a rogues gallery. 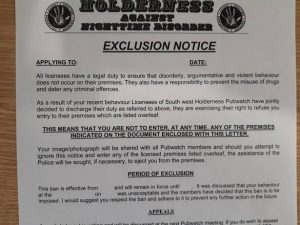 Pub bans being handed out to misbehaving punters in the Holderness area (Image: Humberside Police)

Last week, local officers from Humberside Police were out delivering the bans to known offenders.

Landlords and the police meet monthly to discuss emerging issues. People can then be banned from all the pubs in the group.

“We strongly encourage landlords and owners of licensed premises to become part of or to set up a locally managed Pub Watch scheme as this enables premises to create a safer drinking environment for customers and staff.

“We often work closely with licensees and local authorities and are on hand to assist, where required and where requested, with conveying information relating to individual bans.

“Ultimately, our aim is to create a safe environment for all in our communities.”