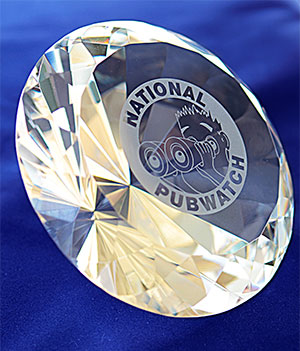 National Pubwatch believes that one of our roles in promoting good practice is to identify those licensees who play a key role in running successful local schemes or those people from public organisations, such as police officers, who provide strong support to their efforts.

For a number of years, one of the highlights of the NPW conference has been the recognition we give to individuals through our Award of Merit and Malcolm Eidmans Awards. However we are keen to open up the process of nomination so that we can identify many more of these unsung heroes. Do you know of anyone who is worthy of a NPW Pubwatch award? If you do know such a person, please consider nominating them through our new on-line process.

Unfortunately we cannot guarantee that we will make an award; but we promise to give serious consideration to the nomination. Priority for the Award of Merit will be given to people who fulfil their role in a voluntary capacity, rather than as a result of being employed to run or coordinate Pubwatch activity. Priority for the Malcolm Eidmans Award will be given to people who go the extra mile in supporting or promoting local Pubwatch schemes.

Please take a few moments to look at the Pubwatch Award section of our website. A role of honour highlighting the achievements of previous recipients can be seen and also the link to the nomination form. We think that we have made the nomination process relatively simple, but please make an effort to provide factual and verifiable evidence evidence about the persons achievements. We look forward to hearing from you.