The scheme means that people creating a bad environment in one spot could be banned from other city centre establishments. 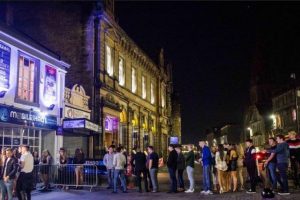 Eight troublemakers have been banned from licensed premises in Stirling following the launch of a new Pubwatch scheme in the city.

The organisation’s motto – ‘Banned from one – Banned from all’ – means the minority of people who cause trouble in any one of a city’s licensed premises face being barred from all their pubs for a period of one year.

Members of the Stirling’s Pubwatch are warning that people who create an unpleasant environment for customers and staff in one pub or bar could be banned from every city centre establishment.

If a banned individual enters a Pubwatch member’s premises and refuses to leave, the police are called immediately.

Local Pubwatch members, who make up most of Stirling’s licensed premises’ managers, meet regularly to discuss any issues they experience and suggest initiatives to keep the city’s night-time economy thriving and safe.

They also share information and photographs with each other via a fully digitised and secure communications system funded by Go Forth Stirling BID.

Go Forth secured 15 radios for pub owners and other relevant stakeholders, such as volunteers with the Safebase ‘safe haven’ initiative, taxi marshals and Stirling Street Pastors, earlier this year.

They link pub and club managers with each other and to police officers, city centre CCTV and the Thistles.

Go Forth Stirling project manager Danielle McRorie-Smith said: “We are all working as hard as we can to strengthen confidence in Stirling’s evening economy and give people the chance to come into the city centre for an enjoyable and safe night out.

“This latest initiative is aimed at tackling the small number of troublemakers whose anti-social and criminal behaviour creates an unpleasant experience for everyone else.

If there are serious incidents where the police are called out, then those responsible should be aware they will be banned not only from the pub where the trouble took place – but from all licensed premises run by Pubwatch members.”

“The bottom line is that a banned individual is not allowed to enter any member’s premises until their ban is finished.”

“Joining forces in this way makes it clear that troublemakers are not welcome and they and their anti-social behaviour will not be tolerated in any Stirling city centre pubs.”

Stirling nightclub the Fubar general manager Dave Thompson and co-chair of Pubwatch in Stirling added: “The Pubwatch scheme aims to pinpoint the minority who cause trouble in Stirling and not those who want to enjoy alcohol responsibly.”

“Ensuring the safety of our patrons and staff in and around licensed premises is a top priority for all of us and being part of Pubwatch is a fantastic way for our businesses to talk to each other and work in partnership with the police and other stakeholders.

“It all helps ensure a safe city centre and allows us to send out a clear, joint message that anti-social behaviour will not be tolerated within our premises.”

The Stirling Pubwatch group is part of National Pubwatch – a voluntary organisation set up to promote best practice by supporting the work of local Pubwatch groups formed by those working in licensed premises.

Go Forth Stirling BID is a major supporter of the city’s Pubwatch group.

For more details about Go Forth Stirling, visit www.goforthstirling.co.uk