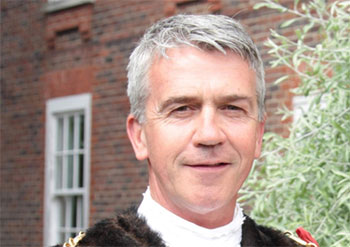 LANDLORDS have criticised a council after a former mayor who quit after being banned from pubs for six months was given a seat on its licensing board.

Tory Gosport borough councillor Wayne Ronayne was put on the committee that makes decisions on pub licences just months after receiving a Pub Watch ban, barring him from 36 pubs and clubs.

He denies any wrongdoing.

Phil Cox, a landlord and chairman of Pub Watch in Gosport, said the new role is a potential conflict of interest. He said: How is he in a position to judge if someone is a fit and proper person?

We have great concerns with it. I dont think hes in a position to sit on any licence thats a Pub Watch member.

Hes still writing to us now complaining about it.

Tory council leader Mark Hook and licensing board chairman Roger Allen have defended the move and said Cllr Ronayne will be competent and impartial on the board.

Cllr Ronayne quit as mayor 40 days after his inauguration following the ban over an incident in Wetherspoons pub The Star on the day he took office.

Liberal Democrat opposition leader Cllr Peter Chegwyn said: Its totally wrong for this man to be on the board.

There are plenty of other council boards he could serve on.

The licensing board is made up of 12 councillors, plus the new mayor Cllr Keith Gill and council leader Cllr Hook.

Members vote on reports about pub and private hire licences if they are deemed too controversial for council officers to decide on themselves.

Arthur Caraccio, owner of Nelsons Bar and Pub Watch member, said it was a ridiculous decision. The mayoress Paula Carter was given a year-long pub ban after attempting to go to his bar.

He said: Its a joke. The problem will be if I have a licence issue and Im up. Is he going to be impartial? Hed have to recuse himself.

Cllr Hook defended his decision to put Cllr Ronayne on the licensing board.

He said: This is just another example of Pub Watch and opposition councillors having a witch hunt against Wayne.

Wayne is a considerable councillor whos taken his punishment. He has my full support and Im appalled theyd think otherwise.

He added it is rare for the board to look at pub licences  the last was in 2012.

If a pub issue did come up Cllr Ronayne could declare an interest and therefore not vote.

Cllr Allen added: If there are circumstances or interests that may prejudice the impartiality of a councillor then he or she should declare such interests.

The News tried to speak to Cllr Ronayne but he was unavailable.

Story and photograph courtesy of The Portsmouth News www.portsmouth.co.uk