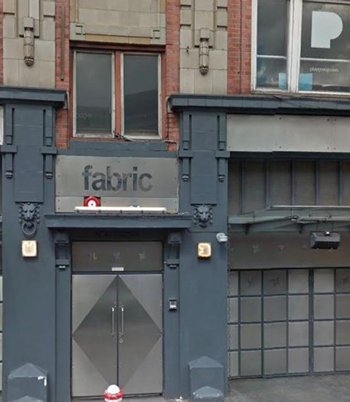 Successful appeal: The club will not have to use sniffer dogs or ID scanners, a court has ruled Google Street View Clubbers at Londons nightclub Fabric will not be checked for drugs by sniffer dogs or have their IDs scanned following a court ruling.

The iconic Farringdon nightspot has won an appeal after the security measures were ordered by Islington Council last December when the club narrowly avoided closure. The council wanted Fabric to be the first nightclub in London to use sniffer dogs after four drug-related deaths in three years.

However, District Judge Gillian Allison ruled at Highbury Corner Magistrates’ Court the use of the L300-a-night dogs could undermine the aim of eliminating drugs. Drug users could circumvent the dogs and security, according to solicitors acting on behalf of Fabric. The judge added the use of ID scanners could spark violence if it resulted in lengthy queues of people waiting to get in.

Both the scanners and sniffer dogs were trialled but were found to be unsuccessful. The clubs solicitor Paddy Whur said, in a statement, the club had proved to be a beacon of best practice after his firm instructed Gerald Gouriet QC to contest the appeal. He said: Gerald and I have spent the last year wrestling with the issues surrounding this case, and in particular the fact that young people have lost their lives after taking drugs on the way to, or in the venue. After hearing Geralds submissions the Judge found that the operator was a beacon of best practice, and she urged Fabric to continue its diligence in what is a difficult environment for all who work in the Night time Economy  where so many young people seem prepared, regrettably, to put their lives at risk by taking unlawful drugs.

Islington Council said more action would be taken to prevent further deaths of young people despite the ruling, issued last Thursday. Cllr Paul Convery said: Islington Council reviewed Fabric’s licence at the request of police because four people have died at the club. These were part of a series of drug-related incidents. Despite the appeal decision, further security measures have been agreed and extra conditions have been added to Fabrics licence to stop drug use and drug dealing.

We will work closely with Fabric to agree the detail of these measures and to make it clear there is zero tolerance of drugs on the premises.

Last December, top DJs including Annie Mac, Chemical Brothers and Groove Armada joined a last-minute campaign to save the Farringdon venue after the Standard revealed its licence was under threat.

Photograph and story courtesy of article in The Standard (16/12/15) www.standard.co.uk