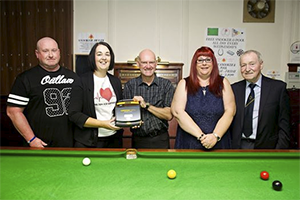 Readers will remember that in January of this year we reported that eight life saving defibrillators had been placed in premises within the Horwich and Blackrod Pubwatch area.

We have received news from Eddie Brooks Chairman of Farnworth and Kearsley Pub and Club Watch that shortly after the defibrillators were installed one of their members, 83 year old Lez Openshaw was playing snooker in St Marys Horwich when he suffered a heart attack.

The equipment was used to bring him back to life and he was taken to hospital. Sadly Lez died in hospital two weeks later, but the use of the defibrillator certainly gave his family valuable extra time with him.

Eddie informs us that his good friend Lez was a great snooker player, well known over the North West and receiving player of the year in the Bolton league only two years ago. In his day he beat some top professionals such as Fred Davies, Alex Higgins and John Virgo.

Since his death the three clubs he played snooker for have been raising money for defibs4bolton. The target is L3,500 and to date they have managed to raise a total of L3,003. In return for their efforts defibs4bolton are presenting the clubs with defibrillators. The three clubs are Farnworth & Kearsley Labour Club, Plodder Lane Conservative Club and the Railway Club.

A fantastic fundraising effort by Farnworth and Kearsley and an endorsement of the efforts of other schemes such as Horwich and Blackrod Pubwatch to make their communities safer.