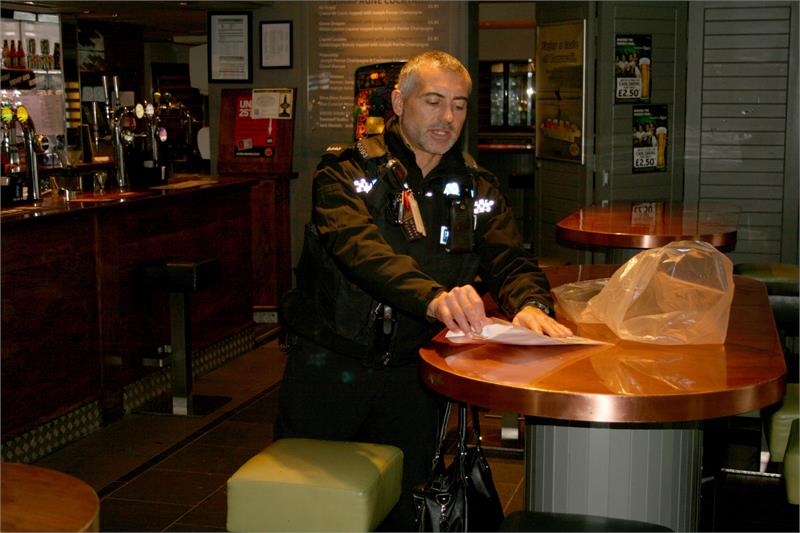 Handbag snatchers who target women in Newquay will be facing a powerful deterrent this summer in the form of a small plastic clip.

Police in the town have received funding for a new innovative preventative measure called the Chelsea clip to use in pubs and clubs to reduce handbag thefts.

The clip was invented in response to the dramatic rise in handbag thefts across the country.

PC Darral Mares, who introduced the Chelsea clip to Newquay pubs and clubs, said they would be a huge help in cutting down on crime.

In Newquay there was a clear increase in handbag thefts throughout the summer.

On one occasion, whilst investigating a handbag theft and viewing CCTV inside a public house, it was obvious that a group of four males were working as a team committing these thefts.

One or two of the group would deliberately place themselves between the victim and their bag to obstruct their view.

Inspector Dave Meredith, based in Newquay, said: At L2.75 per clip, the Chelsea clip is a very cost effective method of preventing thefts in the towns pubs and clubs.

The Chelsea clip is fully supported by Newquay Pubwatch and was launched in Newquay on 29 January 2015, with the first clips being used in the Central Pub.

Clips have been provided to all members of Newquay Pubwatch and will be a common sight in the pubs and clubs in central Newquay.

I would like to commend PC Darral Mares for his initiative in launching this scheme. I am confident that the Chelsea Clip will be effective in reducing the number of thefts in licensed premises in Newquay.

According to a recent survey, during the summer months in Newquay there were over 50 handbag thefts from licensed premises.

A wider survey has also stated that one woman in three has lost their handbag, with almost as many having had it stolen at least once, costing Britains women around L4.9 billion.

As well as replacing lost items, on average handbags contain three credit or debit cards and one woman in eight has had money taken from their bank account after their bag disappeared.

Restaurants, hotels, pubs and even offices are all vulnerable areas, with a quarter of thefts happening from a licensed premises.

Made from injection-molded plastic, the Chelsea clip is attached to the underside of tables in bars, pubs, cafes and restaurants – or anywhere a customer may need to secure a bag, personal luggage or mobile phone.

It takes two hands to remove a bag from the Chelsea clip, so a thief would not be able to remove it without drawing attention to themselves and running the risk of getting caught.

The device has already been installed at exclusive hotels such as The Waldorf Hilton and The Langham in London, and is fast becoming a familiar fixture on the social scene at other leading venues too, including Harrods, Selfridges and Carluccios..

The clips help protect the customers belongings by extending their personal space and keeping bags anchored and in view as opposed to being neglected on the floor or table.