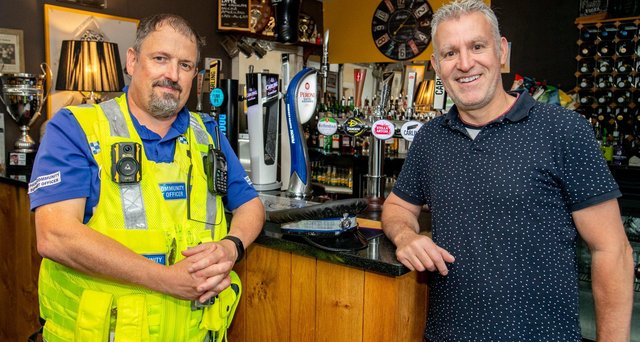 The owners of Harpars Bar in Horncastle are letting the public know that they are back and dedicated to keeping their punters safe.

Mr Rainer Barnes and Harpars are members of Horncastle Pubwatch Scheme, along with many other hostelries in town, and Mr Barnes has extended his thanks to everyone who supported them – and to remind the public that they are there keeping everyone safe on a night out.

He said: “Now that things are getting back to normal, we would like to thank the Horncastle community for supporting the local pubs after what has been a tough few months.

“Also, we would like to let them know that while we want everybody to enjoy themselves, Horncastle Pubwatch is very much up and running and if anyone who misbehaves in one of our licensed premises, we’re all in contact with each other and we’ll bar them from all the restaurants and pubs in town.”

Horncastle Pubwatch sees all the pubs and restaurants in the scheme able to share information between themselves and Horncastle Police via their own dedicated WhatsApp group, which can be anything from a troublemaker in one establishment to counterfeit notes attempting to be being used, which has already seen one troublemaker successfully banned from the town’s hostelries for persistent bad behaviour.

PCSO Nigel Wass of Horncastle Police said: “The Pubwatch has been in the town for over 20 years now and it’s there to support the community when they go out.

“There’s a lot of work that happens in the scheme to protect people that are out in Horncastle and people don’t realise it’s happening, but the licensees talk and share information all the time.

“Our licensing department helps out too and it’s like a community helping each other out.”

“We want to get the message out there that we’re here supporting and protecting people on a night out.”

“We’re lucky that we don’t have too much trouble here in Horncastle, but it’s a great partnership that works well.”

Mr Barnes is also extending an invitation to any other restaurants, pubs and bars who are not already part of the scheme that they are welcome to join.

Any pubs, restaurants and bars who are not already members of Horncastle Pubwatch and would like to join are welcome to speak to either Mr Barnes at Harpars or any of the other establishments, or PCSO Wass to find out more.