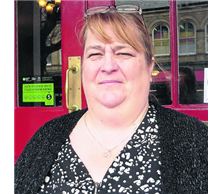 TRADERS have slammed the behaviour of a gang of yobs who acted like ‘idiots’ and caused damage on an Easter Sunday night out.

The group of men, believed to have come to Llandudno from another area, visited several pubs in the town and were later reported to have caused criminal damage at the Cambridge Mostyn Restaurant in Mostyn Street.

They were caught on CCTV damaging signs.

Debra Pedder, licensee at The London pub, said the gang of 15 young to middle-aged men were refused entry and moved along into town.

She said: “Because we have a pub watch system, we’d seen it come up that they’d been causing trouble in Club 147 – we had information that they wrecked a ping pong table and they put pictures on so we knew who to look for.

“We refused them, we just got a lot of verbal off them. They weren’t happy but they carried on going.”

Ms Pedder said the gang’s actions were followed all day on the pub watch group.

She added: “From all accounts from what happened on here, they were performing all over town. Acting like idiots it said.

“It puts visitors off, it’s not the sort of impression we want to give that our town is like that – behave or don’t bother coming.

“They’ve come away from their own town to cause trouble.”

Stephen Barron, manager at The Orme Traditional Fish and Chip Shop, and colleague Ashley Algieri slammed the group’s actions as a disgrace.

Mr Barron said: “We weren’t open at that time but most of our friends were and we heard all about it – it’s an absolute disgrace.

“We don’t need it around the town, I think it’s got a big impact because people read about it and people don’t want to go out drinking at that time.”

A spokesperson for North Wales Police said: “We were informed at quarter to eleven on Sunday, March 27, that some criminal damage had been caused by a group of males at the Cambridge Restaurant.”

A criminal damage investigation is ongoing and anyone who has information can call police on 101 quoting reference number RC16043959.