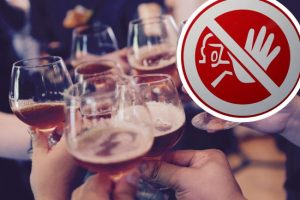 8/6/21: Story and photograph courtesy of The Westmoreland Gazette www.thewestmorelandgazette.co.uk

KENDAL bar watch will start issuing six month bans for customers found to be bringing their own drinks in their establishments.

A recent meeting of the Bar Watch group, a group made up of pubs and bars in the town, brought about the decision to begin issuing stronger penalties for members of the public who attempt to sneak their own alcohol into their premises, rather than buying the pubs beer.

Since the lockdown, pubs have suffered financially and the return to trading has become a much-needed life line for many.

A representative of the Kendal Bar Watch group said: “The recent pub watch meeting has decided to act on this issue.

“There are a lot of people in town found to be taking their own spirits into pubs, and this has caused a lot of frustration among the businesses.

“Anyone caught bringing in their own drinks into one of the pubs will be issued with a warning letter, and then if caught again a six month bar ban.

“Since the industry reopened, we have had a lot of issues and we are very disappointed in the minority of people who are doing this.

“Most of the pubs in town are involved, and we are very disappointed with those who decide to do these things.

“We must stress it is a small minority of people who are doing this. A very little minority.”

NPW Editors comment: This might appear to be a purely commercial decision. However, people consuming their own alcohol could seriously undermine a venues efforts to prevent under age sales and drunkenness, and put their license in danger of revocation.