In what is thought to be the first initiative of its kind in Scotland, potentially life-saving defibrillators have been installed in seven pubs in the centre of Linlithgow.

Staff have been trained in their use, and will be able to administer defib aid to any customer in their pub, or anyone in the vicinity, who has suffered a heart attack or cardiac arrest, while awaiting the arrival of an ambulance.

The project came into being after a suggestion from Linlithgow Pubwatch, and has been partly funded with proceeds from the sale of t-shirts to customers who complete the Linlithgow Trail (formerly Ale Trail) for £5, with the names of the seven pubs emblazoned on the front. The popular Trail, which began in 2014, is now back with a bang after being virtually non-existent for the last two years because of the pandemic.

Ian Gibson, secretary of Pubwatch, and host at the popular Platform 3 near Linlithgow Station, said that the initiative had cost in the region of £6,000. 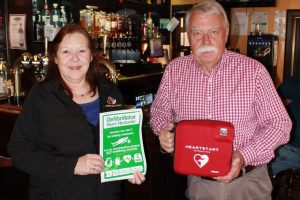 Evelyn Noble, chair of One Linlithgow and Ian Gibson, secretary of Linlithgow Pubwatch.

Pubwatch had approached One Linlithgow, which represents all the business in the town, and the Town Management Group, whose members include local councillors and representatives from the community council and businesses in the town.

Mr Gibson said: “They were more than willing to come on board, and we have each given £2,000 towards the purchase of the defibs. Pubwatch has funded other initiatives which have helped further improve the attractiveness of our High Street, but we felt we should do something to increase its safety for locals and visitors.”

Mr Gibson added that plaques were to be installed on the walls of the seven pubs – the West Port Hotel, the Black Bitch, the Crown Arms, the Footballers and Cricketers Arms, the Four Marys, and Platform 3 – so that anyone on the High Street should be able to locate a defibrillator quickly in the event of an emergency.

Ms Evelyn Noble, chair of One Linlithgow, said there had been no hesitation in giving backing to such a worthwhile initiative.

She said: “It means a lot to have defibrillators in seven pubs the length of the High Street, as well as one we’ve installed in the Burgh Halls at Linlithgow Cross. We all hope of course they will never have to be used, but they could save a life or lives.”

Councillor Tom Conn, chair of the Town Management Group, said that “all credit” was due to Pubwatch for putting forward the idea, and part-funding the project. Adding that it was providing reassurance for both locals and visitors to know they were readily available in the town centre. 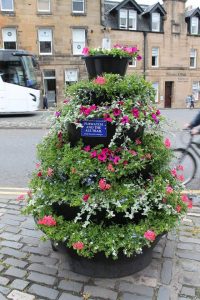