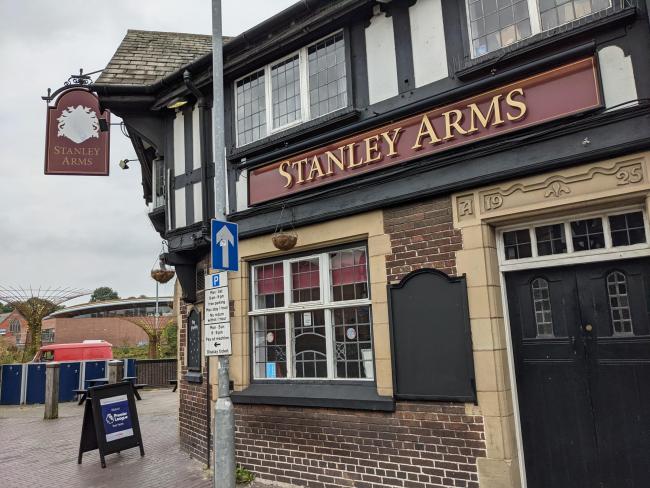 6/9/21: Story courtesy of The Standard www.chesterstandard.co.uk

A 71-YEAR-OLD man who sexually assaulted a woman at the back of a Chester pub was told what he did was “disgusting”.

Alexander Brown, of Dodds Court, Shotton, had previously pleaded guilty to the sex attack, which happened at the back of the Stanley Arms pub on Brook Street on June 5.

Appearing at Chester Magistrates Court on Monday, September 6, Brown was handed a community order, a home curfew and a two-year ban from the pub.

Prosecuting, Alan Currums said it was at about 2pm when the victim, who did not know Brown, went to the back of the pub to have a cigarette.

While she was there, Brown arrived and made a series of sexually explicit comments about what he wanted to do to her.

He added: “Let me feel your b**bies,” as he tried to place his hand on her chest.

Brown had also grabbed her and said: “You have got a lovely bum,” before making further comments about the sex acts, he wished to perform on her.

The woman moved away from Brown and went back inside the pub, telling the pub landlord what had happened.

Brown denied what he had done was wrong, claiming it had all been consensual, but the pub landlord removed Brown from the pub, and he was placed on Pubwatch.

The victim said she had felt “scared and degraded” by the incident and was “physically sick”.

The court heard this was not the first time Brown had been convicted of sex offences, having been convicted in January 2017 and February 2008 for similar matters.

Defending, Adam Antoszkiw said the best mitigation that could be provided was Brown’s prompt guilty plea.

One of the previous sex offences was now some time ago, and Brown was now in ill physical health.

Brown had complied with the probation services in previous times.

But District Judge Nicholas Sanders added: “But without any great progress.”

DJ Sanders told Brown: “I have no idea why you feel this is appropriate. It’s disgusting.

“You’re at an age and stage in life where you should know better.”

Brown was handed a two-year community order to include 40 days of a rehabilitation activity requirement.

He must observe a home curfew every day for the next 44 weeks from 6pm to 8am.

He was banned from the Stanley Arms for two years and must pay £400 compensation to the victim, plus a £95 victim surcharge and £85 court costs.

He must comply with the sex offender notification requirements for the next five years.