17/8/20: Story and photograph courtesy of The Mail www.nwemail.co.uk

A MAN who brandished a bread knife in front of a Lake District bar manager later told police he was nine out of 10 on the “drunk scale”. 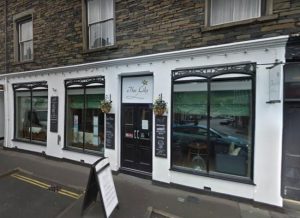 Lee Stuart Atherton, 30, was passing the Lily Bar on Lake Road in Ambleside ‪at around 10pm on December 16 when he saw a man inside.

Atherton became angered when refused entry to the bar due to him being on Pubwatch, shouting at others while a companion tried to calm him down, before leaving the area.

“He was holding it at head height, waving it, threatening to kill Mr Benson – the manager – and, in fact, the companion who had come out to calm him down again.

“Mr Benson described his total shock, saying that this kind of episode is unheard of in that part of the world. It took him five minutes to recover and compose himself.”

Atherton, of Castlefield, Ambleside, later admitted unlawfully and intentionally threatening another with the knife, saying he was nine out of 10 on the “drunk scale”.

Kim Whittlestone, defending, said he was working full-time and had a three-month old son with his partner.

“He is terrified at the thought of receiving a custodial sentence today,” she said. “He is extremely nervous, aware that the court will view his actions that evening as extremely serious but he has done what he can to mitigate that behaviour.”

Recorder Philip Grundy concluded that a suspended jail term Atherton had received in 2014 for previous offending had “appeared to work”.

And, after reading supportive references and hearing Atherton had since shown “candour” and been “frank” about his December crime, the judge suspended an eight-month jail term for two years. He must also complete a lengthy rehabilitation activity requirement.

“On any view that would have been frightening in what to all intents and purposes is the sleepy town of Ambleside,” Recorder Grundy said of the offence.

“This court hopes you never appear in court again.”

NPW Editor comment: This story has worrying similarities with the fatal knife attack on licensee Christian Thornton which occurred on 11 August last year. In that case the offender had also been banned by his local Pubwatch. He had also consumed a significant amount of alcohol before arming himself with a knife and confronting the licensee. The only difference in this case is that Atherton did not follow through with his threats to kill the bar manager.

We do not know the full facts of the case but it seems reasonable to conclude that this incident could so easily have ended with serious injury or worse. Is it any wonder that licensees feel justified in collectively using their Common Law powers to exclude troublemakers from their businesses?