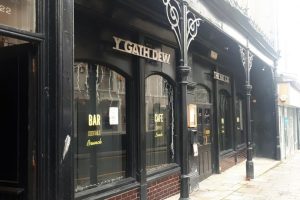 Two men who were abusive towards two bar workers after they were refused service have been ordered to pay nearly £600 in fines, costs and compensation.

Gino Lee Breeze, 32, of Trem Elidir and Richard James Griffiths, 31, of Friars Road, both of Bangor admitted a charge of using threatening, abusive and insulting words or behaviour to cause harassment, alarm and distress when they appeared before magistrates at Caernarfon this morning.

The court heard the two men had gone with a third man to the Fat Cat bar in Bangor High Street during the afternoon of February 7 this year.

Sarah Marsh, prosecuting, said they entered the bar from the rear and were seen by a bar worker, Javed Khan.

He recognised Griffiths as someone who was barred from licensed premises in the Bangor area as part of the Pubwatch scheme and told him he could not be served.

“Griffiths said he wasn’t and the book with those barred under the scheme was shown to him. He became abusive and Breeze joined in,” said Ms Marsh.

Breeze was said to have been swearing and making threats against Mr Khan and Griffiths was equally aggressive.

Griffiths was said to have claimed “what’s wrong with one f****** drink?”

Nomen Khan, another worker at the bar, was also present and was subject of abusive behaviour.

Having left the bar, the three men then returned and were still gesticulating and being abusive.

“They were frustrated at being refused service and they should have walked away. They behaved improperly and they know that now and they are sorry,” she said.