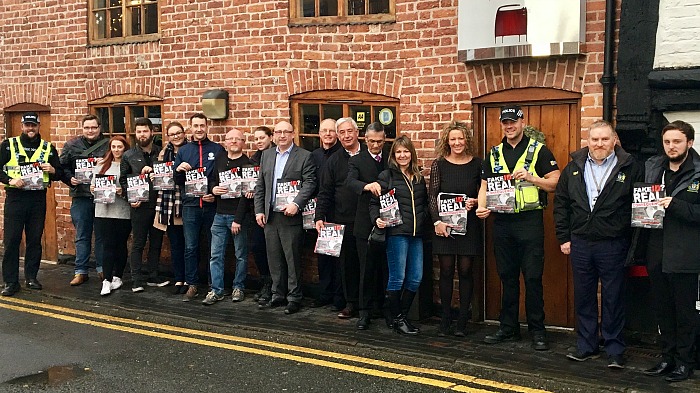 Pub bosses across Nantwich have backed a police campaign to clamp down on underage customers using fake ID.

The initiative, called ‘Fake ID? Real Consequence”, aims to warn those trying to gain access to licensed premises and buy alcohol by using fake ID or someone else’s ID.

Posters are now on display in most licensed premises in Nantwich after the town’s Pubwatch group backed the initiative.

Nantwich Police believe it will help reduce crime as many underage drinkers are either victims or offenders after consuming alcohol.

PC Marc Harley, of Nantwich Police, said: “The use of Fake ID, or real ID used by friends/siblings, is an issue all licensed premises face.

“Inexperienced, underage drinkers are placing themselves in a very vulnerable situation by purchasing alcohol with a fake ID which we are all keen to prevent.

“Due to their age, the addition of alcohol will make them more likely to be affected by crime – whether it be as a victim or offender.

“At the recent Pubwatch meeting, everyone was fully behind this campaign and each left with a poster they would display in their venue.

“We remind people that it is an offence to use fake or altered ID to gain or attempt to gain entry to licensed premises and to then consume alcohol whilst under the age of 18.

“Complying with Challenge 21 and 25 initiatives, licensees and door staff will check ID on entry and positive action will be taken against anyone found committing this offence.”

Nigel Woodhouse, Pubwatch chairman and manager of  The Studio on Mill Street, said: “Faked IDs have been a big problem for the last 10 years with accessibility to replica IDs being easier to obtain via the internet at very little cost or borrowing an older sibling or friends.

“I also operate venues in Staffordshire where they have a “Fake ID Real Consequences” campaign involving warning posters highlighting the fact the individual is breaking the law and there are real consequences to their actions.

“We have, with Staffordshire Police approval, adopted their campaign for our Nantwich Pubwatch with Cheshire Police.

“With police and licence premises support we believe that this initiative could help reduce potential underage consumption of alcohol which is great for our town and community.”