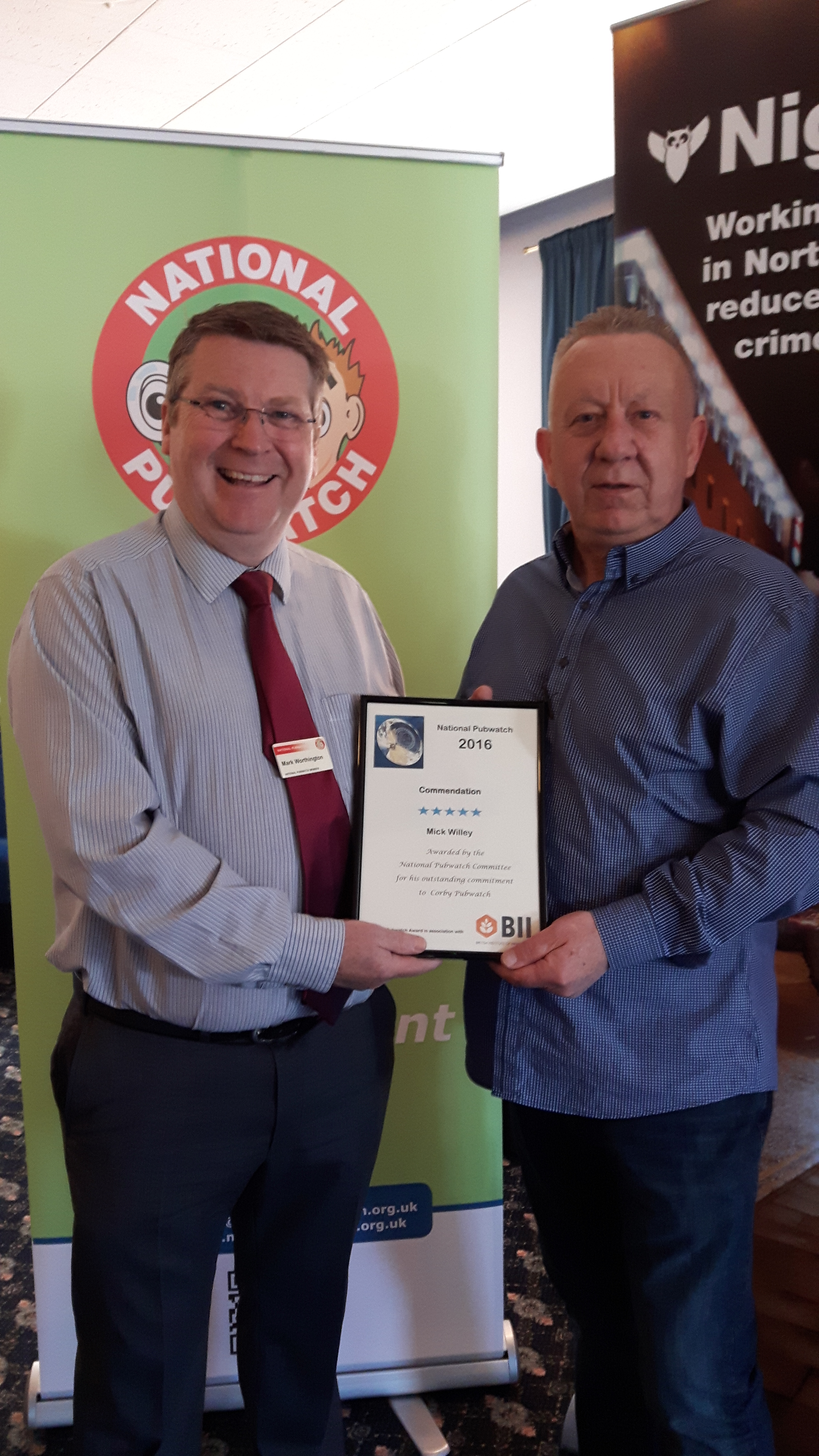 4th May 2016.  At today’s Corby Pubwatch Committee meeting, which also hosted the towns Best Bar None Awards, Mark Worthington presented Mick Willey with a National Pubwatch Commendation for his commitment to Corby Pubwatch. His contribution to the scheme was also recognised by the Corby Community Safety Partnership who also presented him with an engraved tankard.

Mick has been chair of the scheme for over 11 years and has guided it through some pretty demanding times, when memberships started to dwindle and the scheme was at threat of collapse. Mick however stuck with it and through his sheer drive and determination has turned the scheme around and it is now a thriving organisation that makes a serious contribution to the reduction of violence in the Night Time Economy.

Mick has continued to support local licensees and has been a ‘voice’ for the trade taking issues and concerns to partner agencies and raising the profile of Corby Pubwatch. Mick has also given his support to the Corby Community Safety Partnership; attending meetings, supporting initiatives and projects and coming up with viable ideas that assist in the reduction of crime. In addition Mick has been the driver for Pubwatch support of the towns Street Pastors.

Mick understands the importance of sharing information and developing and maintaining positive communication channels with the Police and Local Authority and he is a key contact for both the trade and Police. Corby is particularly different to other towns in the area as it doesn’t really have a Town Centre ‘Leisure Zone’. Pubs and bars are spread widely across the town, so having a thriving Pubwatch scheme is particularly important in maintaining communication and the licensed trade’s Community spirit.

Karen Gower, Corby Community Safety Officer says: “Corby Pubwatch is a real asset to the Community Safety Partnership; always supporting our initiatives and getting involved in multi-agency projects. We felt that today was an ideal opportunity to recognise Micks personal commitment to the scheme and to acknowledge the support we receive from Pubwatch in our efforts to make Corby a safer town to work and socialise.