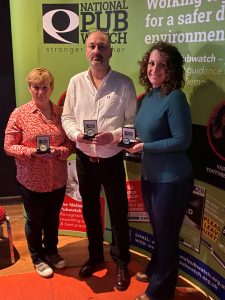 All three recipients were nominated by Bill Donne the Reading Pubwatch secretary.

The first award went to Stuart McNaught the General Manager of the Purple Turtle:

Stuart was one of the founding members of Reading Licensees Association established in 2004, which developed into Reading Pubwatch the following year. He was the schemes Chair from 2005 to 2018. During his tenure he Chaired the monthly Pubwatch and Committee meetings and hosted the four Pubwatch Best Bar None awards and six of the annual conferences.

Stuart stepped down from the role as chair in 2018, but soon after was voted back onto the Committee. Since then, Stuart has often acted as Vice Chair to steward meetings in the absence of the Chair.

Stuart also sits on the Night-Time Economy Partnership and for the past four years he has been an active member of the Business Improvement District committee, representing BID payers from the NTE.

As the General Manager of the Purple Turtle, Stuart regularly appears on BBC Berkshire, BBC News and Sky offering his views on the state of, and challenges facing operators in the night-time economy.

The second award went to Sally Leonard, Coordinator of the Reading Street Pastors:

Reading Street Pastors scheme was launched in Reading in 2009. Sally took over the scheme as coordinator in 2012.

She has been a regular attendee at the monthly Pubwatch meetings over the past decade. In addition to attending monthly meetings, Sally will meet with the Chair to discuss additional cover by the Street Pastors when required for new events that are being organised by venues operating in the NTE; for instance, Halloween, Fresher’s week(s) etc to make sure that there are sufficient resources allocated.

Sally has also been a member of the committee that manages the ‘First Stop’ first aid facility that has been operating in the town centre at weekends from 21:00 hours through to 03:00 hours for many years, initially based on a double decker bus but now housed in a local church.

Sally is described as a consummate professional who has an infectious enthusiasm for the role. Her efforts and those of her colleagues has a significant and positive impact on the safety of vulnerable people in the night time economy.

Alexa has been a regular attendee at Reading Pubwatch meetings since mid-2017, representing the local Business Improvement District. Whilst Alexa is a non-voting member of the Pubwatch she has regularly engaged with licensees and has provided immense support to the Pubwatch initiatives.

On behalf of members Alexa has sourced Cardiac Defibrillator Kits for licensed premises and has visited sites to support the training of the use of the life-saving equipment. On the request on Pubwatch members Alexa sourced Drinks Spike Test Kits and distributed them to venues throughout the town.

Alexa is extremely effective in acting as a liaison between the Pubwatch members and other stakeholders within the ENTE including police, council, street pastors and the ‘First Stop’ first aid centre.

Alexa has provided guidance to her counterparts in Newbury Pubwatch. She has been actively campaigning for the provision of more CCTV operators in Reading to ensure that the town is covered 24/7.

At the recent Pubwatch Anti-Terrorist Conference in Reading, Alexa took on the responsibility of the registration of attendees in order that Committee members could attend the training session. She even completed Delegate Certificates of attendance so they would be ready.

During the lockdown period Alexa acted as host for the monthly Pubwatch meetings that we held on-line, sending out invitations and liaising with the Chair and Secretary of Pubwatch. Alexa continued her role as M Teams host when we launched the Suburban Pubwatch meetings online.

Alexa is a key member of the NTE partnership, contributing ideas and concepts and ensuring that guest speakers receive their joining instructions and hosting the meeting providing support to the Chair.

She is described as a driving force behind the Purple Flag Status and has been instrumental in helping the launch of Reading’s Best Bar None. 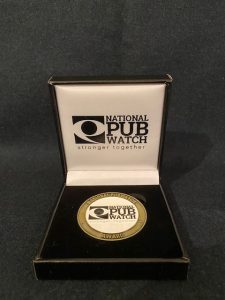