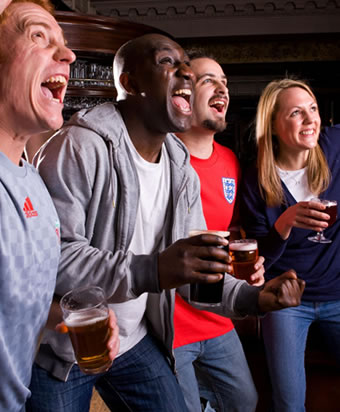 With only 20 weeks to go until the 2014 World Cup kicks off, the British Beer & Pub Association (BBPA) has produced definitive guidance for pubs, to help ensure that this years World Cup screenings are a success.

The new advice has been developed with the support of the Local Government Association (LGA) and the Association of Chief Police Officers (ACPO). Live sport is now a hugely important part of the pub experience  the BBPA says that around four million people headed to their local in 2010 to watch the first England World Cup game, clearly showing preparation for Brazil 2014 is now essential for licensees.

This years event comes with new considerations compared to previous World Cups. The time difference will mean that fixtures will be screened later in the evening. With the majority of British football fans unable to make it to Brazil to see the matches live, pubs are likely to experience even larger crowds.

To help make World Cup screenings a success, pubs will benefit from this clear and helpful guidance. Examples to consider include contacting the police and licensing officers to let them know in advance of plans for showing World Cup events, and given the late finish of some matches during the tournament, making taxi numbers/late night public transport information readily available to assist customers in leaving the venue safely.

The guidance is intended as a template for pubs, local authorities and police to work together to ensure that the World Cup is a successful and enjoyable occasion. It provides a handy checklist for licensees to run through in making sure all angles to running a successful event are considered and covered.

Brigid Simmonds, BBPA Chief Executive comments:
Pubs are the home of live sport and they should be at the heart of the 2014 World Cup. This new BBPA guidance has been designed to ensure that Brazil 2014 events can be a success. If pubs follow the guidance and work closely with their local authorities, we can ensure that as many people as possible can enjoy this exciting sporting spectacle at their local.

Councillor Tony Page, LGA Licensing Champion, said:
Councils are aware of the importance of the World Cup to residents and are ready to help people celebrate in a safe and responsible manner. For many people, watching matches in a local pub is a fundamental part of the whole experience and councils will endeavour to support pubs, clubs and other organisations that wish to offer this facility.

Councils will always seek to say yes to well-run businesses which have proven that they can cater effectively for selling alcohol at events where emotions run high. However, they also have a responsibility to residents who may live in close proximity to popular venues and may be exposed to significant disturbance as a result. Licensees should begin discussions with councils, and their neighbours, at an early stage so that the best solutions can be found.

The LGA is pleased to support the British Beer and Pub Association in providing this advice for licensees who wish to hold safe and successful events.

Our aim, which we know is shared by the licensed trade, is to ensure that everyone who wishes to can enjoy this summers matches in the comfort of their local pub, with friends and fellow enthusiasts is able to do so in a safe environment and that they drink responsibly.

It is important that that peoples enjoyment of the World Cup takes place in a peaceful and safe manner, and this guidance is a great resource for publicans seeking to make the most of this sporting highlight without compromising on standards.