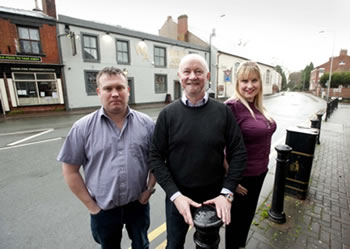 Rowdy pub-goers could be slapped with red cards and banned from town bars as a new Leyland Pubwatch scheme is launched. Landlords are coming together to set up a strict system to keep trouble-makers out of Leylands pubs and make responsible revellers feel safer in the town. Lee Forshaw, who recently opened the Withy Arms in Worden Lane, wants to introduce the idea to Leyland following the programmes success in Bamber Bridge. Letters have been sent to landlords inviting them to attend the first meeting of the new group next month, which will come together once a month after that. One aspect of the scheme is for bar bosses to dish out yellow warning cards to anyone causing a nuisance, and red cards to those who really cross the line – meaning they will be banned from every establishment covered by Pubwatch. Lee, who also has the Withy Arms in Bamber Bridge, said: Any licensee can nominate someone to be barred, and then well take a vote – it will depend on the severity of the incident. It works well in Bamber Bridge and there are similar schemes in Chorley and Preston. I think Leyland could really benefit from this – it just needs someone to kick-start it. The pub scene in Leyland is really picking up, and Pubwatch is a way to make people feel safer in the town, and for landlords to work together. We can ring each other up or send a text to say that weve had a bit of trouble with a certain group of people, so that people are aware of what might be coming their way. We can text descriptions and even photographs to warn each other. Lee says the group will also be able to discuss issues as a team, and present them to the police or the councils licensing department if there are any concerns. The Pubwatch project can also be used to bring people together to come up with other ways of improving the town too, he believes.When its coming up to something like the Leyland Festival, we could talk about doing something special for that as a group, he said. And we can present ideas or talk about problems to the police and the council as a unit, instead of individually. Alan Burdett, managing director at Ribble Brewery, which is backing the scheme, added: I am currently the chairman of the Bamber Bridge Pubwatch and having spoken with people from licensing and the police in South Ribble, they all share the same support for a local Pubwatch in Leyland, to help reduce incidents in licensed premises. I have always found this type of group both helpful in keeping undesirables out of our pubs and clubs, and it also shows that we are supporting the licensing objectives. But most of all it enables us to exchange information and provide a unified and influential voice with local authorities, including the police. Story and photograph courtesy of Leyland Guardian www.leylandguardian.co.uk