8/6/20: Nottingham City Pubwatch held a virtual meeting; possibly one of the first to host such a gathering in the country. The meeting was held via Zoom and was also streamed live to the groups private Facebook page.

National Pubwatch East Midlands regional representative, Michael Kheng, joined the meeting and said that he was amazed at the number of people in ‘attendance’. They had 84 participants using Zoom and a number of others viewed the meeting via social media bringing the total number to nearly 100 people.

The meeting lasted just under two hours and was the usual fact packed style we have come to expect from the award-winning scheme. With the recent announcement of a push to open pubs in two weeks’ time, there was a presentation on what measures pubs could start to think about and consider implementing ahead of re-opening. Although it was stressed that the Government had yet to issue any guidance.

Michael said: “The Nottingham Pubwatch meetings are always a great meeting to attend. Due to the large number of attendees the meetings are usually held in the Broadway Cinema Nottingham and the virtual meeting was just as good. Some great information was provided to the members.” 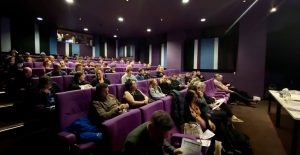 They are already planning to hold another virtual meeting once the government guidance on the re-opening of pubs has been released.

Member David Lucas said: “We were able to provide a range of speakers (operational, police, environmental health and legal) who concentrated on the topic of re-opening premises and received very positive feedback”.