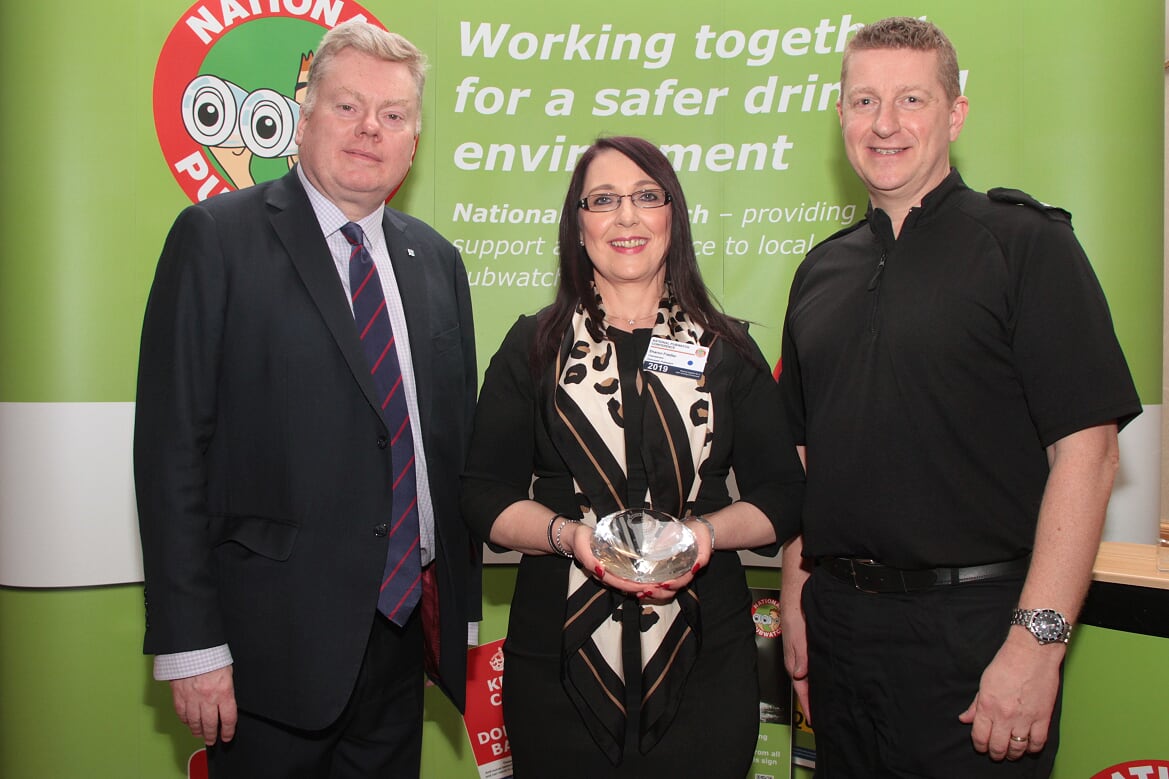 Sharon is the owner of two Doncaster pubs, the White Swan and the French Gate. She has been the Chair of Doncaster Pubwatch for the last 7 years.

She is described as the backbone of her local scheme and has managed to bring together all nine separate schemes in the Doncaster area by forming a regional group with a standard information sharing agreement.

She is specifically praised for her commitment to work with other stakeholders to address the issue of violent crime, as Doncaster was identified by the Home Office in the early 2000’s as a violent crime hotspot. But she has also championed a multi-agency approach; with the setting up of a Safe Space initiative; the relaunch of Best Bar None; and support for their local Street Pastors.

Her nomination is supported by Andrew Steele, the police licensing officer and Richard Mirfin the town centre Sergeant. Both highlighted the effectiveness of Doncaster Pubwatch and the role that Sharon and the members play in providing safe and responsibly managed venues. They stated that she is committed and passionate about the Pubwatch scheme

“Sharon ensures that Doncaster Town Centre Pubwatch operates to National Pubwatch good practice advice. As an ex-Police Sergeant with Yorkshire Police I can say that her relationship with the police is second to none and she and her members are keen to assist wherever possible”.

In partnership with the Council’s Public Health team, I have worked with Sharon for some time now in trying to develop a Safe Haven in the town centre for the night-time economy. It has shown me her desire to work for a safer town centre, to enable people to enjoy coming in to town during the night time and to make it the most enjoyable experience possible for them. This is something that Sharon continually strives for, and not just through the Safe Haven initiative, but also through her passion for making sure that Doncaster Pubwatch reflects that desire”.

Simon was unable to attend this year’s award due to a family illness. His award was collected on his behalf by his colleague Declan Smyth. The trophy will be formally presented to him at a later date.

Simon is a Neighbourhood Officer for Thames Valley Police. He has been the police liaison officer for the Reading Pubwatch Scheme for 10 years.

He was nominated for this award by Inspector Gassan Shaladan, who stated that Simon has been instrumental to the progression of Readings Pubwatch, the strengthening of relationships between the police and licensed premises, and the town’s success in achieving a Commendation in its Purple Flag accreditation.

He specifically praised Simon for his leading role in the implementation of the ‘Hub’, which is a safe space facility, located in the Reading Minster, and his forethought to obtain funding from the Business Improvement District, which provided much needed security cover for people working at the centre.

He also highlighted his work to provide town centre venues with a Friday night intelligence briefing at a local branch of McDonalds. This initiative has seen Pubwatch members benefitting from regular security updates, including offender images together with warning markers.

His nomination was supported by Sally Leonard, the Reading Street Pastor Coordinator, Alexa Volker the BID Operations Coordinator and Inspector Sarah Sanderson, who says his ability to bring everyone together in partnership and his commitment to the role is demonstrated by the success of Reading Pubwatch.

“Simon has been intrinsic to the police support of Pubwatch over a sustained 10-year period. In 2015-16 Reading Pubwatch was at breaking point and we had no manageable controls in the town centre, and I would say it was from this period that Simon really fought hard to getting some of the larger venues and personalities to support the night time economy.

During this period, Simon was key to rebuilding Pubwatch with systems in place which were strongly supported by the police; the town centre Hub initiative; Street Pastors and the electronic messaging system.
As Chair of Reading Pubwatch it is great to have such a forward-thinking police officer on side, with his support for the night time economy and a real pleasure to work with”.