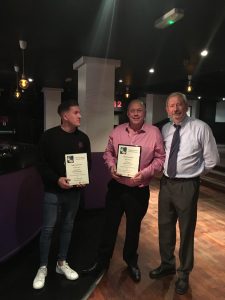 Rob Kennedy is the Operations Manager and DPS of Q-Club. He took on the role of Pubwatch Chair in January 2015. In his role he has garnered support from the general managers of the towns late-night venues. He represents the NTE on the Business Improvement District Committee and with their assistance was instrumental in launching the schemes secure internet platform for recording photographs of banned individuals.

He facilitated the launch of weekly Friday night ‘Night-safe’ briefings to all licensees in conjunction with Thames Valley Police. He also assists the Police to identify club and sporting calendar events to allow the appropriate targeting of manpower.

He took a leading role the towns ‘We serve drinks, not drunks’ campaign.

Bill Donne is the proprietor of Smoking Billy’s Rib House. He was a founding member of the towns Pubwatch in 2004 and has served as its Honorary Secretary since 2005. During that time, he also personally set up several other local Pubwatch schemes in outlying areas. He also set up the Reading University Liaison Group to address issues related to Freshers Week.

He is a member of a number of local NTE committees which have a direct impact on making the town safer, including Chair of the BBN audit committee. He has also been instrumental in organising and hosting numerous annual Pubwatch dinner dance awards ceremonies, Pubwatch conferences, ‘Proof of Age’ conferences and Project Griffin/Argus anti-terrorist conferences etc.

Through their actions both Rob and Bill demonstrate admirably, how key individuals can make a real difference to the safety of people working and socialising in the NTE.