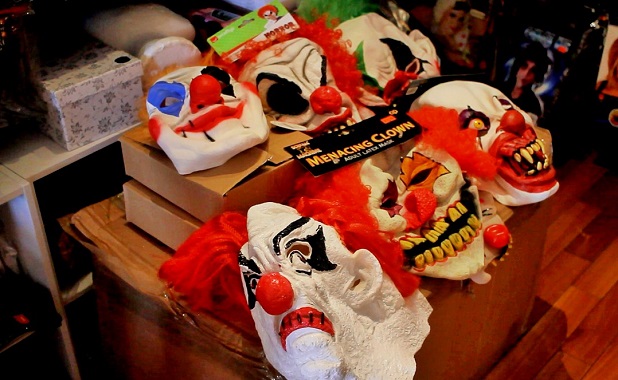 Anyone planning to wear a ‘killer clown’ costume this Halloween may want to think again as they could find themselves banned from entering pubs and clubs across the city.

40 of Plymouth’s pubs and clubs have been advised by Plymouth’s Pubwatch to ban killer clown costumes this Halloween.

Richard Smith, chairman of Plymouth’s Pubwatch, the organisation which aims to keep our pubs safe, says that the aim of the ban is to provide a “safer weekend for everyone”.

The 47-year-old, who has run pubs for most of his life, says that the police have advised the group to take this action due to the recent issues surrounding killer clowns

People wearing Killer clown masks will be turned away
The chairman, who is also the South West’s regional representative, said: “I’m sure that the national press coverage of killer clowns has not given them the best publicity, but we can’t take any risks.

“The action has been taken after much consideration and after discussions with members.

“It is primarily for everyone’s safety.”

The group wrote in their statement to managers of local public houses that the action is taken “for the protection of all guests, staff and management”.

Popworld is part of Plymouth Pubwatch and will be one of many turning away clowns this weekend
Mr Smith, a Plymouth man, said that he thinks Halloween costumes are on the rise.

“I’ve been running pubs most of my life and I’ve never seen so many people dressed up in them as I did last year,” he said.

“I turned up in normal clothing and felt so under-dressed.”

With the rise in Halloween costumes partakers it could prove difficult for pubs to manage but Mr Smith explained why the ban needs to be in place.

“If people see a clown out and perhaps there’s children around or someone is scared, it could cause fights,” he said.

Female clown Dr Maggie Irving has a PhD in clowning and has criticised the ‘killer clown’ craze saying it gives clowns a bad name. Although the ban is specifically for this Halloween weekend, Mr Smith said: “Until this all dies down, we will be cautious about letting anyone in who is wearing a clown costume, we suggest perhaps not wearing any form of clown costume as there could be repercussions from the authorities for those who do.”

Written in their release to pubs in the area, the group advised: “If anyone decides to wear a normal clown costume then I would be cautious given the recent press coverage.

“Going forward all clown costumes should be treated with caution given the recent publicity surrounding them.”
Story and photograph courtesy of The Herald www.plymouthherald.co.uk