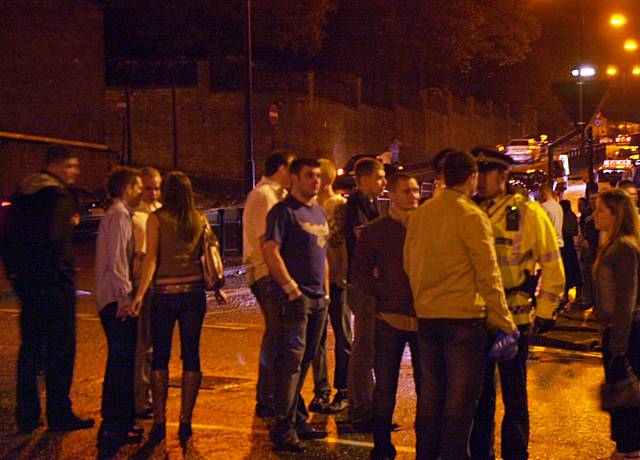 Nothing to see here…

From the start of 2016 up until the end of May the force recorded 31 arrests, an average of 6.2 per month, a rate which is 25 per-cent less then the previous year. In 2014, GMP recorded 98 (8.16 per month) drunk and disorderly arrests with 2015 seeing a slight increase of 103 (8.58 per month). The stats make good reading for the developing borough which opened its new cinema in the old town hall last month. Over the years, Greater Manchester Police and Oldham Council have worked together to tackle drunk and disorderly behaviour before it has a chance to escalate. As well as taking a zero-tolerance approach and employing dispersal orders to move people on, the force and the council have worked together with local clubs and bars to develop Oldham’s Pubwatch scheme.

The initiative, which has seen 18 premises in the town centre sign up in the last couple of years, gives police a direct link to local businesses so they can deal with issues quickly and reduce the need for arrests while also providing training to premises who sell alcohol in how to deal with drunk and disorderly people. As well as the town centre, the Pubwatch scheme runs across Saddleworth and Lees, Failsworth and Hollinwood, Saddleworth North, Royton and Shaw and Chadderton.

Councillor Barbara Brownridge hailed the drop in arrests. She said: “It’s fantastic news that we’ve seen such a significant drop in drunk and disorderly-related arrests. But it’s no surprise or coincidence. “We work closely with Greater Manchester Police, Greater Manchester Fire and Rescue Service, the Probation Service and the pubs, bars and clubs in Oldham. “There are also six established Pubwatch schemes throughout the borough which are all very well attended. Premises that serve alcohol in Oldham receive a full training package around dealing with people who are drunk and disorderly ­- this is something that has been introduced in recent years. “The work has had a really positive impact on Oldham. And with key regeneration projects such as the cinema now open to the public, Oldham is returning to the thriving family-friendly destination we all know it can be.”

Chief Inspector Andy Harty said: “This reduction in arrests for drunk and disorderly behaviour in Oldham shows the work that we and Oldham Council are doing to tackle the issues before they escalate is having an effect. “Over the past three years we have worked hard to tackle such behaviour in its earliest stages, employing dispersal orders to move people on and showing people that we will not tolerate unrest of any kind. “We have also worked closely with the council and local clubs and bars to develop Oldham’s Pubwatch scheme, seeing 18 premises in the town centre sign up in the last couple of years. This gives us a direct link to local businesses so that any issues can be dealt with quickly and effectively. “By intervening as quickly as possible we reduce the need for arrests to be made and ultimately help people to continue with their day in a safe way for them and the community in which they live.”