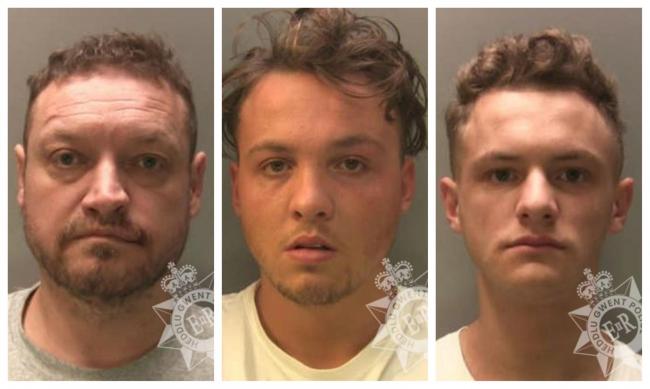 A FATHER and his two sons who launched an “outrageous” attack on a pub landlord, his bar staff and customers on New Year’s Day have been jailed.

Reuben Edwards, 49, Leonard Edwards, 22, and Nino Edwards, 21, carried out the shocking assault at Pontypool’s Iron Duke after drinking a “prodigious” amount of alcohol.

Their victims were punched and kicked and chairs, bottles and glasses were thrown through the air during the violence.

Prosecutor Andrew Davies told Cardiff Crown Court how the trio had been drinking pink gin and Monster Energy drink cocktails at the pub on January 1.

He said the Iron Duke’s landlord Frederick Farley had told the group at around 9.50pm they had had enough to drink before they set upon him.

Mr Davies said: “Mr Farley was approached by Leonard Edwards who told him that one of the bar staff had short-changed him before he picked up some glasses and dropped one.

“The landlord initiated a refund for all the drinks before the others gathered around him.

“He was punched in the face causing his nose to bleed and struck several further times.

“Glasses were thrown across the bar and close to the head of the landlord.

“One of the bar staff Joel Williams was attacked and Richard Price, a member of the public, was punched and kicked.”

Mr Davies added: “Mr Farley was dazed and confused and his son dragged him into a back room and used an umbrella under the door handle to stop them getting to him.”

The court then saw CCTV footage which captured the appalling incident.

The prosecutor said “wanton damage” was caused by the Edwards family and one of them damaged a £500 flat screen TV.

Mr Davies said: “Customers were then attacked. There were kicks and stamps. Glasses and chairs were thrown.

“Mr Price, an NHS employee, said he was punched to the head repeatedly.”

Abigail Jackson, mitigating for Reuben Edwards, said: “When he saw the CCTV footage, he was appalled by his behaviour.”

Lucy Crowther, representing Leonard Edwards, told the court: “He has given up drinking as a result of this incident and is going to become a father next year.”

The judge, Recorder Patrick Upward QC, told the defendants: “Members of the public were beaten to the floor.

“On New Year’s Day, the three of you spent the day drinking a prodigious quantity of alcohol at one pub before moving on to the Iron Duke and drinking more.

“By 10 o’clock the landlord said you had enough and a fight started.”

He said the trio were then responsible for an “outrageous piece of behaviour”.

The three were each jailed for 12 months and ordered to pay a surcharge upon their release from prison.

NPW Editors comment: This is another depressing example of the intimidation faced by members of the pub and hospitality trade. The sentence appears excessively lenient when you consider the physical abuse suffered by the licensee and staff and damage caused to the reputation of the venue. Is it any wonder that Pubwatch schemes feel the need to use their Common Law powers to exclude people like this?