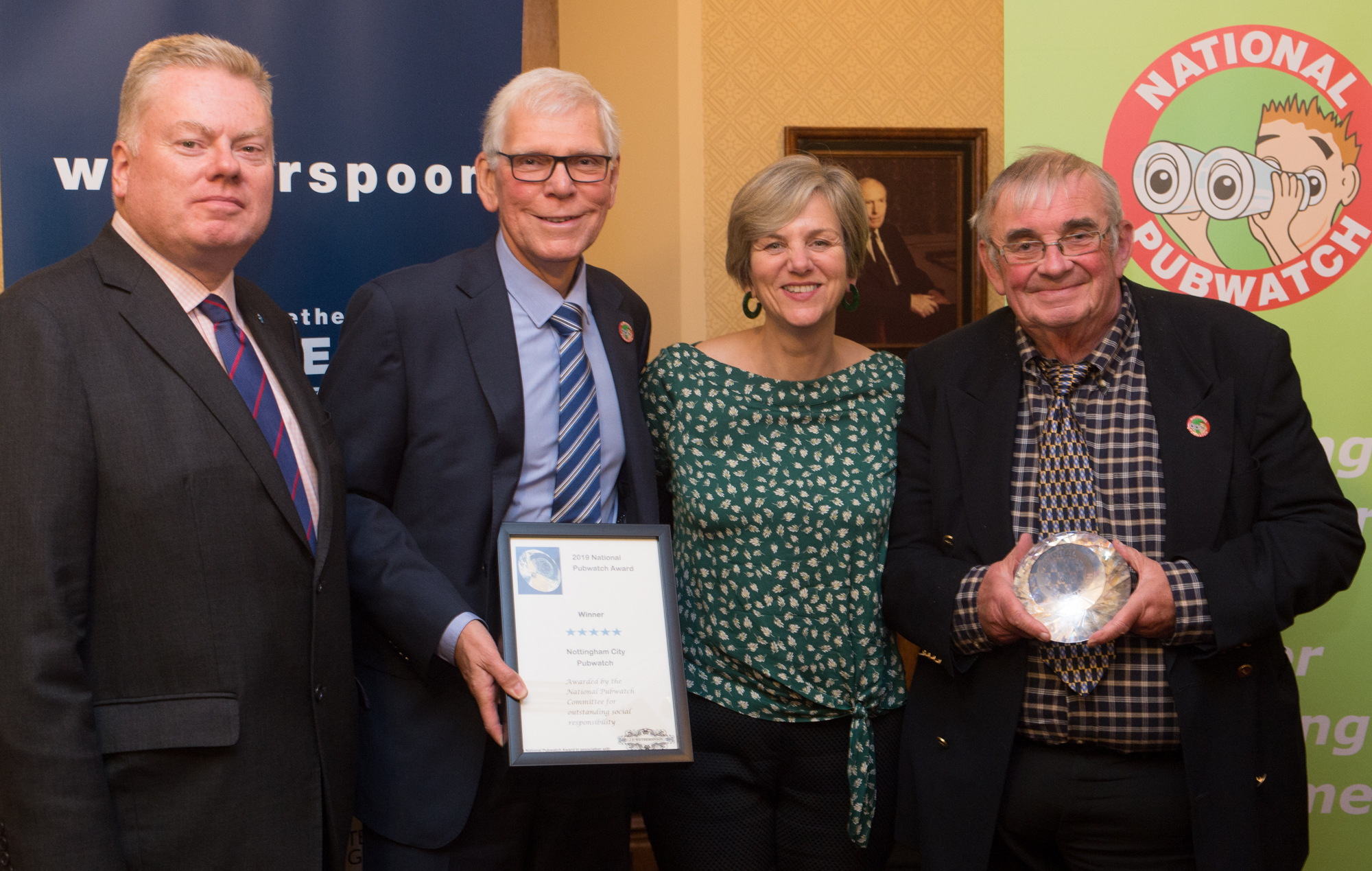 I must begin by declaring a vested interest in Pubwatch, as I am the Treasurer and a member of the Committee of the Nottingham City Pubwatch scheme. In 2019, our scheme was honoured to receive the National Pubwatch Award.

The purpose of this article is to promote the practical benefits of a Pubwatch scheme and to provide some insight into what makes a scheme sustainable and successful.

The Nottingham City scheme has been in operation for 30 years and has always had an existing or former member of the industry as its Chair. The current Chair has been in post for 25 years.

There is a close working relationship with the Police, Council, business improvement district (BID) and other partners, with representatives from each body attending meetings regularly. They are invited to Committee meetings as appropriate and help shape the agenda, but they are not involved in the management of the scheme.

The constitution of the Pubwatch states that the scheme is established with the general aim of sharing knowledge, raising awareness and lobbying the Government and other public bodies in relation to the issues involving businesses and operators who are involved in the leisure industry.

The city centre’s reputation reached an all-time low in 2007 when it received adverse publicity in the media about the high levels of violent crime which impacted on student and visitor numbers and the general perception of the City.

A Leisure BID was formed and Pubwatch worked closely with the BID and the authorities to address the various issues.

As a consequence of the combined partnership approach, the reputation of the city centre was restored to the extent that it saw a reduction in overall crime levels, students returned to reside in large numbers within the city centre and its perception improved. It has since been held up as an example of best practice by the Home Office and the Local Alcohol Partnership Group.

An independent report relating to the night-time economy in the city centre published last year praised Nottingham Pubwatch for its service to members and achievements.

In addition, Pubwatch worked with other partners to enable the city centre to obtain the independently assessed Purple Flag status for its night-time economy in 2010 and to retain that status to this day.

How does the Pubwatch operate?

The Pubwatch has a formal constitution that has been prepared with a view to avoiding legal challenges and in accordance with the good practice recommended by National Pubwatch. It provides for the appointment of a Chair, Vice-Chair, Secretary and Treasurer from within a Committee and contains provisions relating to membership, meetings, and the appointment of officers, resolution of disputes and mediation.

The Officers and Committee represent a diverse cross-section of leisure operators within the city centre. For example, the Vice-Chair is the owner/operator of an LGBTQIA venue that achieved the accolade of Best Bar None in the city centre awards held in 2019. Other members of the Committee include local operators Castle Rock, DHP Family and Fletchergate Industries, national consultants Night Time Economy Solutions, and leisure venue The Cornerhouse.

Prior to each Pubwatch meeting, the Committee meets to discuss current issues, with Committee members voting on and minuting any decisions. Representatives from the licensing authority, police and BID regularly attend Committee meetings by invitation.

Prior to the coronavirus pandemic, Pubwatch meetings were held three times a year (April, August and December) at a city centre cinema to accommodate the large number of persons attending (averaging between 80 and 100).

Other public agencies are invited to attend, including representatives from Drinkaware, the Licensed Trade Charity, Mencap, PASS and the British Beer and Pub Association.

If necessary, the scheme can arrange a meeting at short notice. Following implementation of the restrictions on 23rd March, meetings of the committee and members have taken place remotely using Zoom. There have been two Pubwatch meetings with several speakers providing the members with advice and assistance relating to compliance with the regulations and guidance. In particular, the issues relating to reopening businesses safely and in a COVID-19 compliant way have been comprehensively addressed.

The Nottingham city centre Pubwatch scheme had 225 members at the end of March 2020 and, following the popularity of the recent meetings, the scheme now has almost 400 members.

How does the Pubwatch publicise its work?

Following each Pubwatch meeting, members receive minutes containing summaries of all the presentations and topics of discussion, together with copies of any relevant documents and links to relevant websites.

The scheme has its own closed Facebook group which is available to members. This provides Nottingham specific and industry-wide information, training videos, events, warnings/scams e.g. fake notes, etc. The closed nature of the group also provides an important forum for members to discuss pertinent information, issues and potential solutions privately.

The Chair of the scheme has been involved with licensed premises in the city centre for many years and has an excellent working relationship with the local media. As such, his comments are sought by newspaper and television reporters in connection with any news items related to the leisure industry. This coverage regularly raises the profile of Nottingham Pubwatch and its work.

The Pubwatch also works closely with other agencies to promote positive messages about the city centre through initiatives such as Best Bar None and Drinkaware Crew and the media campaigns associated with them.

How has the Pubwatch promoted social responsibility?

Pubwatch members have been actively involved in the introduction of some national initiatives.

An integrated advertising campaign by Drinkaware with the message, ‘You Wouldn’t Sober, You Shouldn’t Drunk’, was initially tested in Nottingham before being evaluated elsewhere in England.

Drinkaware introduced a behaviour change intervention introducing staff into venues to provide support to customers who are potentially vulnerable because of excessive alcohol. The scheme and the associated training were designed in Nottingham by a Pubwatch Committee member, and a pilot took place at another Committee member’s venues in Nottingham before Drinkaware Crew was introduced to more clubs and venues across England.

The fact that the Pubwatch meetings are held in a cinema has enabled members to be made aware of and adopt a number of initiatives with training rolled out using training videos prepared by National Pubwatch and other bodies, including:

A representative of a local drugs agency regularly attends Pubwatch meetings to provide members with up-to-date information regarding current trends and issues. This enables members to identify and deal with drugs issues in their premises.

Regular attendance of a senior police officer and the Chair of the Licensing Committee enables members to be aware of current licensing issues, particularly those relating to crime and disorder.

The co-operation that this creates can be illustrated by the support from members provided for the use of drugs dogs at venues in the city centre.

A legal update is provided at each Pubwatch meeting to ensure that members are familiar with their legal responsibilities and can ask licensing questions of a professional, which is seen as a major benefit of attendance.

Members are also made aware of their duties so far as social responsibility is concerned through updates provided at Pubwatch meetings, relating to such things as the mandatory licensing conditions on irresponsible drinks promotions. Examples are provided of promotions which would not be acceptable.

Pubwatch supported the introduction of street pastors in the city centre several years ago. The street pastors work closely with Pubwatch members to provide advice and assistance to customers in the night-time economy, particularly in the early hours.

The Pubwatch was pleased to endorse and support the “Stay with Your Pack” campaign which was launched in Nottingham at Christmas 2017 through a combination of various partners including the police, and subsequently distributed nationally by Drinkaware.

Recently, the Pubwatch and its members have supported initiatives concerning availability and use of defibrillators and distribution of special medical kits for use in the case of knife attacks.

Specialist training is also made available to members, and taken up by them, in connection with various subjects including personal licence certification, safeguarding and first aid.

Pubwatch regularly incorporates wider industry issues within its agenda and focus, for example recent meetings have included sessions on the likely impact of Brexit and how to prepare for it as a licensed premises, as well as the recruitment and retention of staff. This included the issues surrounding securing good quality door staff, as well as other specialist roles such as chefs and front of house staff.

Materials, such as National Pubwatch posters, are provided for members at Pubwatch meetings and upon request. On occasions, other items such as drug wipes and bottle stoppers are also available.

Steve Baker and his colleagues at National Pubwatch do a tremendous job in supporting existing Pubwatch schemes and encouraging the creation of new schemes. I would advise anyone seeking assistance to visit their website at https://www.nationalpubwatch.org.uk/.