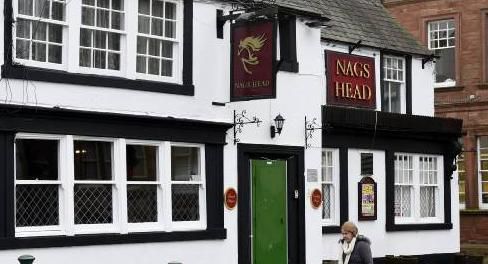 A yob who verbally abused staff in two pubs and told four pensioners he would “knock their heads off” has been jailed.

Gary Richardson, 34, who later blamed his antisocial behaviour on the death of his best friend, was already on a local Pubwatch scheme when he stormed into the Nag’s Head in Market Place, Brampton, on February 16.

Carlisle Crown Court heard that he was thrown out of the pub after he threatened the pub’s chef and an area manager – but he then went on to behave just as badly at the pub next door, the Howard Arms.

Richardson, of Well Meadow, Brampton, admitted two counts of affray and one common assault. He was jailed for a year.

Jon Close, prosecuting, described how at 2.35pm the defendant was seen walking towards the pub, smashing together two cans of lager so hard that drink was spilling from them.

Once inside, he slammed the cans down on the bar and demanded to be served, shouting and swearing, and telling staff: “You know what I can do. You know who I am.”

When refused service, he said he would get his own drink, declaring: “Who’s going to stop me?”

When he tried to push his way behind the bar, he pushed a pub manager in the chest. As he was being thrown out of the pub, Richardson told chef Simon Turner-King that he was going to kill him, said Mr Close.

Going into the nearby Howard Arms, Richardson was immediately abusive. He approached four pensioners sitting at a table, and without provocation, asked what they were staring at told them he was going to “knock their heads off.”

When a woman manager intervened, he made sexual advances towards her, said Mr Close, but he stopped when asked to.

Two days later, the court heard, Richardson attacked a man who was asking him about the death of his best friend, punching his face, head and body, and stamping on his ankle.

Keith Thomas, for Richardson, who has 45 offences on his record – including seven for violence – said he had gone off the rails after the death of his close friend but now realised this was wrong.

A man who could stay out of trouble, he cared for his three-year-old daughter while the mother, a nurse, was at work.

Jailing Richardson, Judge Peter Davies told him that he should be ashamed of himself, particularly the way he had he called staff “disgraceful” names. He even confronted a barmaid in her 60s.

“When you drink too much you behave violently, and you intimidate people,” said the judge. “The best thing you can do is avoid alcohol”

The judge said the defendant was given a suspended sentence for violence and possessing a knife in 2013.

Richardson had repeatedly breached the sentences of the court, he said.

The judge added: “For the last 15 years, you have continually and persistently committed offences of public disorder and violence. Drink is the explanation. You have had your chance. You’re not going to get another one.”