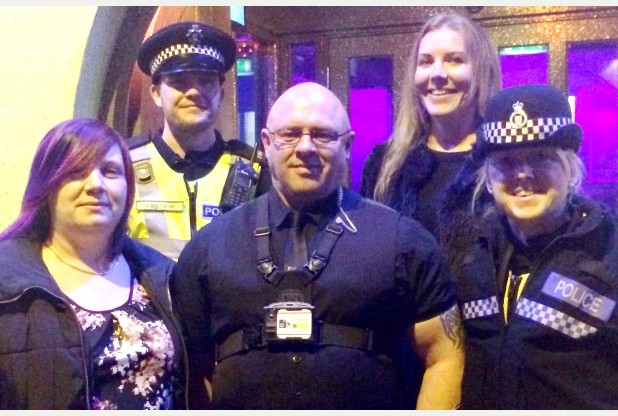 Door staff at bars and clubs in two Leicestershire towns are to wear small digital cameras on their chests to deter rowdy behaviour. Staff who work on the doors of venues in Ashby and Coalville will use bodycams from tonight.

The cameras, which capture high quality digital footage, will act as a deterrent to customers who behave aggressively to security staff and other clubbers, police and officials believe. They have been introduced to coincide with the run-up to Christmas when venues, particularly those in Ashby, get busier. Police officers will be on the look-out for any signs of drug use by people visiting the towns bar, including the use of drug testing kits at some premises.

Customers who test positive for drugs will be refused entry. A similar scheme was launched in Melton recently and police and officials believe they have cut customers drunken and bad behaviour by half. Similar cameras are also widely used by police officers across Leicestershire. Councillor Trevor Pendleton, chairman of the Safer North West Partnership, said "The partnership is delighted to support this scheme. "Any projects that enhance the safety of the towns within North West Leicestershire can only be a benefit to the public. "Not only will the bodycams help the public to enjoy their nights out safely, but they will also offer the first line of defence to door staff who are in place to help the public stay safe while they enjoy the nightlife the towns have to offer."

Sgt Mark Watson, of Coalville and Ashby police, said: "All of these measures have been discussed with licensees within Pub Watch schemes in the area. "They are in full support of these ideas and we all hope to make this Christmas a safe and enjoyable time for everyone who goes out drinking in the area." Another measure introduced in the weeks before the busy Christmas period include a patrolling vehicle staffed by local police officers who will offer safety advice and dealing with incidents.
Story and photograph courtesy of Leicester Mercury www.leicestermercury.co.uk