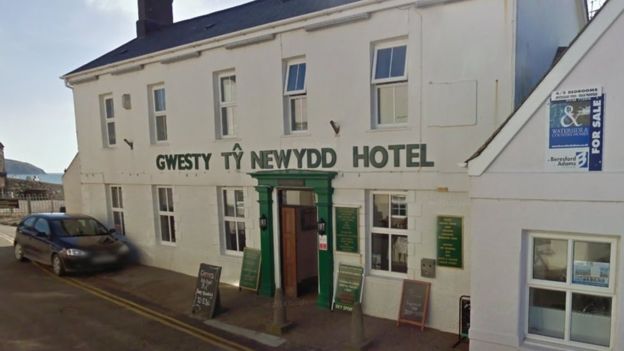 Coach trips that travel from pub to pub on the Llyn Peninsula have been barred from many hostelries in the popular tourist area.

The move comes after concerns rowdy behaviour may be bad for business.

Ian Roberts, landlord of Aberdaron’s Ty Newydd Hotel and vice-chairman of the village’s tourism group, said he had “no choice” but to introduce a ban.

The trips had become a popular tradition, particularly with stag and hen parties.

But Mr Roberts said: “We used to welcome these trips, many of which were well behaved. But the behaviour of some were appalling.

“It’s not an ideal situation to have a bar full of drunk people at the same time as families eating at the hotel. These drunks can appear threatening to some people.

“Usually, Aberdaron is one of the final destinations on the tour, so people tend to be drunk when they get here and the noise and swearing tend to be higher by then.

“Aberdaron is not a big place and gangs of drunk people gathered around the village started to affect other businesses as well, which is why the group has decided not to allow these tours from visiting.”

Not all pubs have banned them though – Caroline Lee, of the Lion in Tudweiliog, directs boozy coach trips to the back of the pub, away from other punters.

“They can be a nuisance, especially when six vehicles arrive at the same time and the swearing can be unpleasant. But most loyal customers enjoy seeing them because they come and lighten the place up, especially if they’re in fancy dress,” she said.

One of the pubs where many begin their journey is the community-run Tafarn y Fic in Llithfaen.

Myrddin ap Dafydd, one of the directors, said: “It’s nice to see Welsh people visiting us from areas like Conwy, Caernarfon, Bala and Anglesey. These trips have been going for some time and we’ve always welcomed them at the Fic.”

Various pubs in Abersoch have also told the BBC they have stopped welcoming such coach trips.

David Carl Jones from Caernarfon said he was “very disappointed” to hear of the ban.

“These trips have always been fun events. We’ve always received a warm welcome at most of the pubs along the way, but I also know about quite a few instances where the boys have gone overboard.”