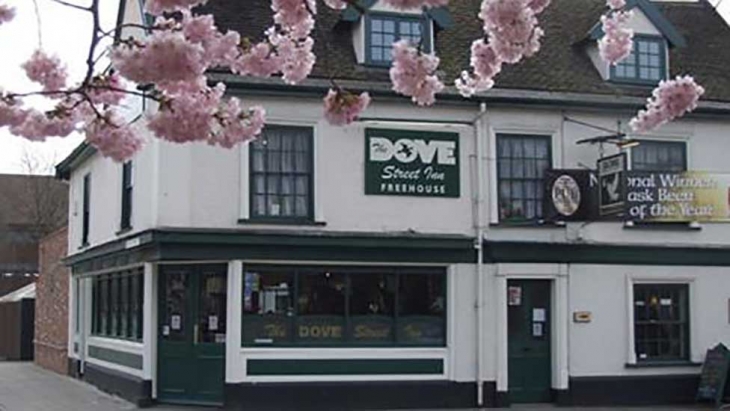 An Ipswich pub landlord has criticised Suffolk police for pulling out of a crime reduction scheme which has been praised by the Home Secretary, Theresa May. Adrian Smith, landlord at the Dove Street Inn and Chairman of Ipswich PubWatch, said it "beggared belief" that the police had withdrawn from the scheme citing Data Protection laws, because other forces elsewhere in the country were still running successful schemes.

Suffolk Police told Ipswich Spy that they had withdrawn from the scheme after a review of Data Protection policies because they were concerned that the data storage did not meet security standards. A police spokeswoman said: Suffolk Constabulary has had to suspend its PubWatch Online scheme. During a regular review of our Data Protection responsibilities it was identified that that the data, that is stored by a third party host, did not meet security standards. The system allowed licencees to view details, including photographs, of individuals who have been barred from licenced premises in identified towns and was a civil banning scheme rather than a criminally enforceable initiative.

Chief Inspector Matt Rose, of the Constabularys Community Safety Team said; It is unfortunate that we have had to suspend this successful scheme, however we are now looking at alternatives, including working with the Crown Prosecution Service and courts to issue Criminal Banning Orders, which give the police greater powers to enforce bans and to publicise them as appropriate.

Home Secretary Theresa May praised PubWatch schemes in her foreword to the Governments Alcohol Strategy, saying that they were good examples of what can be achieved when the industry worked together with law enforcement.

The decision to withdraw from the scheme also drew criticism from Tim Passmore, Suffolks Police & Crime Commissioner. I shall be taking this up with the Acting Chief Constable to ensure this scheme is not put at risk, said Mr Passmore. He was concerned that Data Protection laws should not get in the way of protecting the public. I am a big supporter of the Investigatory Powers Bill, and if the laws are getting in the way we need to change the law. I am a great fan of schemes like this. It seems ludicrous for it to be put at risk by Data Protection.

PubWatch Online is a commercially operated web based communication facility for members of existing PubWatch Schemes. It allows users to pass messages and information and also instant access to details and photographs of individuals who have been banned from entering licensed premises by PubWatch schemes. The system for communication and data access helps strengthen the enforcement of the PubWatch Scheme initiative and is of particular assistance to Police and other agencies seeking to make resource efficiencies.

The old and inefficient way of manually distributing offender information by the police is greatly improved upon by use of the web site. Licensees can now access this information on-line with controlled and immediate access as well as other facilities such as a messaging system helping Licensees keep in touch with one another. The system is already used by many PubWatch schemes and police services in England & Wales and the organisation behind it claims the system has been designed to meet all the essential requirements of the Data Protection Act.

NPW Editor Comment: National Pubwatch has been made aware of this decision. Police Forces are specifically allowed to share data under section 29 of Data Protection Act for a Policing Purpose i.e. the prevention and detection of crime.

The decision as to whether the sharing of police data is justifiable is obviously something that all Police Forces have to make on a case by case basis. However we are confused as to the reason given by Suffolk Police and why they have decided to completely withdraw from a long standing agreement which would have been subject of an Information Sharing Agreement with the Pubwatch scheme.

We would be interested to know exactly on what basis they consider that the support of licensees working legitimately to exclude troublemakers from licensed premises is not an exercise in the prevention of crime? Obviously every Police Force will have to justify how they will share data in accordance with the principles as outlined in the Data Protection Act but this decision will have serious implications for partnership working in Suffolk.

We would have thought that if the Force has concerns regarding how data is currently stored that they should be trying to address this issue rather than walking away from an effective partnership scheme?

They suggest that they will be looking at alternatives; such as working with the CPS to issue Criminal Banning Orders which will give the police powers to enforce bans and to publicise them as appropriate. Presumably they will expect the Pubwatch licensees to share information with them and help them enforce these civil banning orders? Real partnership working is not a one way process.

We hope that common sense prevails and that Suffolk Police seriously reconsiders their position.