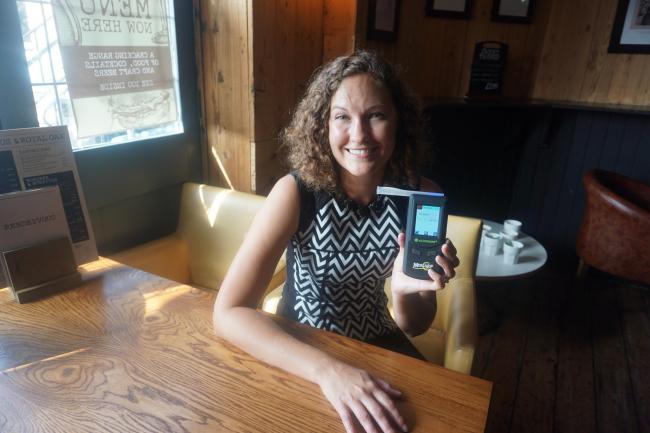 Dr Katharine Boyd, Senior Lecture in Criminology at the University of Exeter

A BREATHALYSER scheme is now open for public consultation.

Over the past few weeks drunken revellers have been breathalysed entering licensed premises in Weymouth town centre as part of an ongoing scheme from Dorset Police and Weymouth Pub Watch.

The #RU2DRUNK initiative aims to cut down on violent crime by tackling the culture of ‘pre-drinking’ in which a growing number of people consume excessive amounts of shop-bought alcohol at home before heading into town.

The effectiveness of the three month pilot is being monitored by leading sociologists from the University of Exeter.

As part of the assessment, members of the public are now being urged to give their opinion in an online survey.

Sociologist Dr Dreolin Fleischer, who took to the streets of Weymouth one Friday night, said: “The main thing I found was misconceptions among members of the public. Some people thought everyone was going to get breathalysed, others thought it was set at the drink drive limit.

“Of course, this is to be expected over the course of the trial”

By introducing the breathalysers, Dorset Police are hoping to replicate two previous schemes that have proved successful in Norfolk and Torquay.

Weymouth Neighbourhood Inspector Pete Browning said: “From speaking to door staff, they all appear to be on board and they see the benefits through evidence of them using it.

“I think from a customer point of view the response is quite mixed. There are people who think it is is a bit of a nanny state thing, or for premises to make more money.

“My take on it is, I don’t really mind so long as people are talking about it and are aware of it then it’s doing its job.

“It’s not going to stop all crime but it is a useful tool and above all it’s a preventative method, putting people in a cell overnight doesn’t prevent crime, it’s about changing attitudes and behaviour.”

So far 29 premises throughout Weymouth have signed up to the scheme.

It is hoped the breathalysers will have multiple benefits including reducing the demand on the ambulance service, and rejuvenating the night time economy by urging people to buy drinks in venues rather than drinking at home.

Weymouth Pub Watch Chairman Keith Treggiden said: “The breathalysers were discussed at our meeting and over all there were no negative comments at all. Even the general public don’t seem to have said anything bad about it.

“Whether it is making any difference? I don’t think it is at this stage, people are still coming into town very late, but it is making people think and I think it is still too early to tell.” The questionnaire can be found at: www.surveymonkey.co.uk/r/RU2Drunk_Weymouth