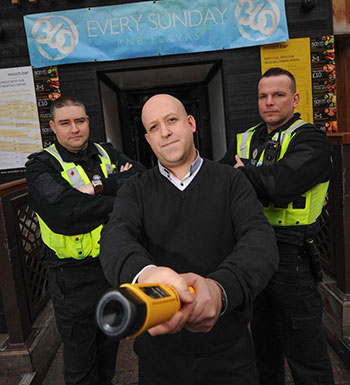 New ways to combat drunkenness in Birmingham have proved unpopular with Irish bars.

A selection of family run pubs based in the Digbeth area claim the new scheme  a joint effort by West Midlands Police and Birmingham City Council to tackle alcohol related violence in the city  would not make sense for their venues or their regulars. Introducing breathalysers in Digbeth would make no sense as you cant reduce zero violence by any percentage, it just isnt happening here, said publican John Tighe, who is Chairman of the Digbeth and Highgate Pubwatch Association.

These are well-run family pubs, working class boozers which dont even have door security, so no the implementation of this scheme is just not going to happen here. The new breathalysed-on-entry initiative, which launched across Birmingham this month, is intended to tackle so called pre-loading and alcohol related violence in pubs across the city. Central Birmingham Police Sergeant Dave Francis said: In recent years weve seen an explosion in pre-loading culture, people coming into the city already drunk and even getting out of taxis holding bottles of wine and vodka and downing them before going into clubs.

He added: The breathalysed-on-entry scheme is designed to reduce alcohol-related crime and disorder in our nightlife centres. A similar project was trialled in Norfolk last year and was found to reduce the number of disorders at venues by around a third. More than 40 venues, largely based around the Broad Street area of the city, have already agreed to implement the scheme  which will see their door staff armed with an Alco-Blow detector that picks out people who may already be drunk.

The devices, which have been funded by the councils Night Time Economy Steering Group, will flag up anyone who has consumed more than twice the legal drink drive limit as they try to enter the pub. This is solely a matter for the big pubs and clubs in the city centre, such as those on Broad Street as far as I am concerned, said Mr Tighe, who has been the landlord at The Spotted Dog pub in Digbeth for the last 30 years. But its a rather bizarre scheme as they have decided to set the breathalyser at twice the drink drive limit  which is about three pints or so, he added. So when CAMRA [The Campaign for Real Ale] members go out in groups to have a half pint in a number of pubs theyd get turned away at some under this new scheme. Its just bizarre and its not something that applies to any properly run pub. Its a scheme for pubs with issues.

West Midlands Police have confirmed that pubs which do opt in to the breathalyse-on-entry scheme are not told how many people to test, who to test or whether to refuse entry to anyone that blows over. But venues will be required to complete a log for each test, noting the time, age and gender of person, the reading and whether the person was allowed entry or not. The information will be used to build a picture of the types of people drinking to excess and can be used to form new policing strategies that could help further reduce alcohol-related anti-social behaviour and crime they added.